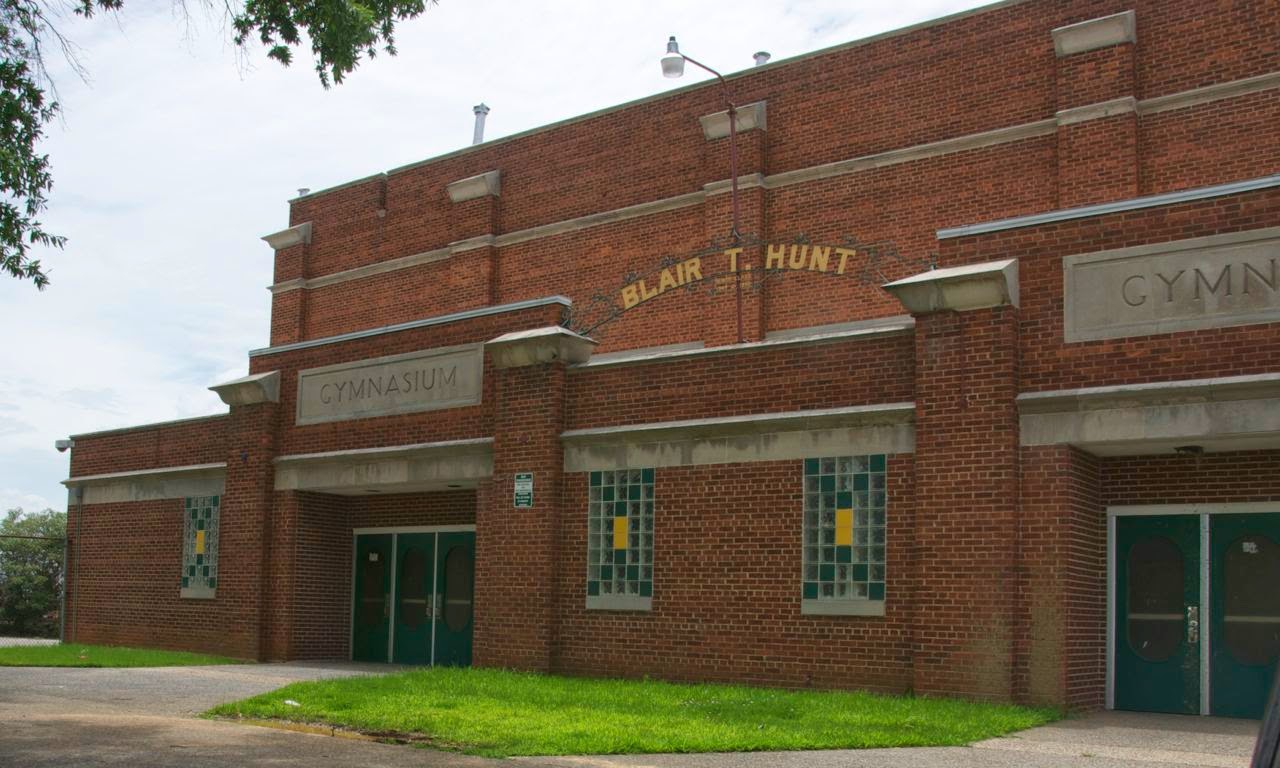 When I posted on the Booker T. Washington High School in Memphis a few days back, I forgot I had also taken a photograph of the gymnasium.  The gymnasium was named in honor of Professor Blair T. Hunt, who served as the principal of Booker T. Washington for 24 years.  Professor Hunt, who also pastored "The Boulevard"--the Mississippi Boulevard Christian Church, served in World War I.  His experience of the poor treatment given African American soldiers inspired his commitment to improve conditions and foster equality in Memphis (WKNOfm).

The gym was dedicated in 1950. Shortly before completion, the city learned it would be named for Professor Hunt, who was still living and still working--an unheard of and unexpected honor for an African American.  The "...first first-class gymnasium...in its history..." was constructed at a cost of $250,000 (Williams, N. D. 29 April 1950. Down on Beale. The Pittsburg Courier, p. 9).

Professor Hunt was deeply involved, by all accounts, in the lives of the young men and women he served.  From Mr. Nat D. Williams' regular column, "Down on Beale" I found frequent reference to both Professor Hunt and the Booker T. Washington high school.  Excerpts from one particularly moving, and telling story, are shared below.


...the folk living in that section of this man's country dominated by Beale Street, down here where the blues began, deep in the heart of Dixie, saw something last week that made their hearts skip a few beats at first, and then stand plumb still.

They were seeing history in the making.  They were first-row witnesses to one of the most unusual events in the social evolution of the South.  And they stood transfixed with awed amazement at the occurrence, as if they'd heard the first tentative toots from Gabriel's trumpet.  Their astonishment and awed amazement were understandable.

Not a living Beale Streeter had in his memory...not a record of Beale Street carried in writing...not a tradition of Beale Street's long past could pass along by hearsay or word-of-mouth--anything to match the "thing" that the folk in town saw last week.

A Memphis Negro boy...a soldier who took part in the Korean War, was honored posthumously, with the Distinguished Service Cross...The boy whose mother and father received the coveted award was Pvt. Edward O. Cleaborn, and 18-year old kid from the slums of South Memphis...an area which is almost a replica of Beale Street, the home of the blues...those indigo tunes which carry such deep sentiments of disappointment and nostalgia.

Young Cleaborn...was a typical "boy of color" in the deep South.  When he reached his teens circumstances dictated that he make a decision about the slum-y condition in which he lived.  He volunteered for service in the United States Army.  This gave him a chance to wear some decent clothes...eat regularly...enjoy some measure of protection from indiscriminate protectors of the system of American racial segregation...find a bit of self-expression...and get the feeling of "belonging" to something big and substantial.  He "belonged" to the Army.

Private Cleaborn was killed when he returned rifle, grenade, and machine-gun fire at the contingent of Chinese army approaching his unit.  His actions permitted other members of his outfit to escape the intended entrapment (Williams).


The thing that knocked Memphis to its collective knees was the manner in which the whole town responded to the award which was given to Private Cleaborn.  Colored Memphis was satisfyingly shocked by the manner in which the white press referred to Private Cleaborn and to the soldier's family.  It meant a whole lot to black, beige, and brown Memphians to see and hear the soldier's mother and father referred to as "Mr." and "Mrs."  This section of the white South is just getting around to that sort of reference, ya' know...

Since young Cleaborn's last formal schooling was in a class at Booker T. Washington High School, Prof. Blair T. Hunt, principal of the school, suggested that the facilities of the big institution might be appropriate for the presentation.

Mrs. Cleaborn...had stated publicly that she did not want high-ranking Army officers and public figures to bring the award to her shambled residence back over in Bailey's Alley in far South Memphis...didn't want her boy's memory and heroism tarnished by the odors of a back-alley slum...like his life had been.

So the public was invited to the beautiful, spacious and new Blair T. Hunt Gymnasium...something else new for Memphis...Some 3,500 folk sat in quiet and undemonstrative silence...(Williams, N. D. 25 February 1951. Down on Beale. The Pittsburg Courier, p. 10)

A new public housing project in Memphis was dedicated and named for Pvt. Cleaborn on November 11, 1954 (Ratcliffe, M. B. 13 November 1954. Memphis Scene. The Pittsburg Courier, p. 16).  Cleaborn Homes was recently demolished and mixed-income housing, renamed Cleaborn Pointe, was constructed in its location.

A sad reminder of those times, but also a heartwarming story of someone giving his life for his country and, in turn, his community coming together to honor him in a previously unheard of manner. And, I love the building.