Boswell's Service Station, aka 'bank', old post office, and Ruth B. French Library...could a coffee house be next?


For over 10 years now, every time I have driven through Byhalia on the way to Memphis, I have said I was stopping some time to take photographs.  (Yes, I have been known to procrastinate--I am always 'fixin' to do' something...or as they say in Mississippi, 'finny do it.') Yesterday, I took the camera intending to stop on my way to Memphis, but a number of things conspired to prevent my having that much time in advance...I was 15 minutes late for my appointment instead.  However, as luck would have it, I finished the appointment earlier than anticipated, and was able to make it back to Byhalia a wee bit prior to sunset and although not optimal, had enough light to take some photographs of one block.  Over the next few days, I will showcase a few of them, but if you have never been to Byhalia, take note that you need to spend a few hours there touring the Byhalia Historic District, and look up the National Register Nomination form--you will learn a lot about this little community. 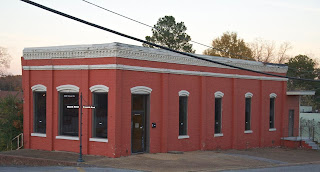 The Italianate building on the corner of Church and Brunswick has seen multiple uses since its 1900 construction date.  According to Candace Z. Helms and Samuel H. Kaye, 1995 National Historic Register nomination form, the building's history includes life as a bank originally, then in the 1910s, served as Boswell's Service Station.  It was used as the Post Office in 1919, and later, as the Ruth B. French Library.  The building appears to be vacant now.

The public library in Byhalia was established in 1940, and renamed the Ruth B. French library in 1990 in honor of a teacher and library board member.  The library was relocated in 2003. 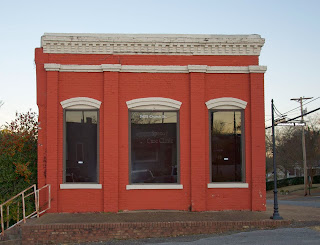 The features include the double arch brick headers over the windows, and the pilasters between windows.  The parapet features "denticulation" (Helms & Kaye, 1995).  The doorway has been replaced.

In one of my alternate lifestyle fantasies, I would open a little coffee house/bookstore/Internet station in this charming little building, and while I was busy blogging about preservation in Mississippi and New Deal research, I would chat with my one or two patrons of the day, and the high school student I hired to serve coffee (and lattes) would become my mentee as I passed on a love for history and the importance of community and relationship.  My friend Gigi would drop in for working vacations from time to time (she has always wanted to own a bookstore) and give guest lectures on recent books she had read, and her husband, the executive chef, would surprise patrons with his wonderful culinary creations.  During their visits, patronage would double or maybe even triple to 8 or 10 folks--just the perfect size for a group!

I've always wanted to go to Byhalia but you know I've never really had a reason. Not that I need a reason to pick up and go somewhere.

Love it, love it! Still one of my favorite great ideas that will probably never come to pass but such fun to think about!