Citizens Bank: Where was it, and what did they do with the post office? 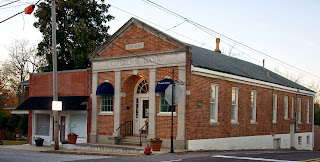 The former Citizens Bank, now serving as the Chamber of Commerce, was the building that started my interest in Byhalia all those years ago.  It sits on the corner of Church Street and Hwy. 309 as you pass through town.  According to Helms & Kaye, 1995 National Register nomination form, the building is a Classical Greek Revival constructed in 1910, and altered in 1919 and again in 1929.  The one-story brick veneered building has three bays delineated by concrete pilasters.  The round arched bays have voussoirs and concrete keystones and sills. 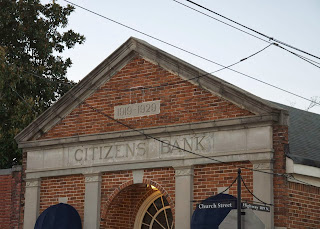 The entablature is marked with Citizens Bank, and an insert in the pediment reveals the dates of the remodeling.  The building was originally a wood frame building, and the brick veneer was added in 1929. 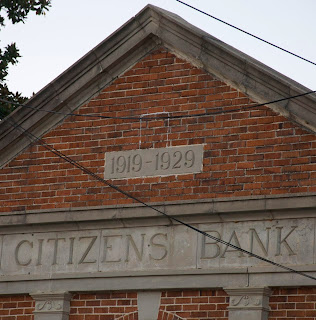 I like the detail on the concrete pilasters, as well as the interesting concrete raking cornice.

It gets more complicated.  The current Citizens Bank of Byhalia is headquarters for this "locally owned and operated since 1919" bank.  Although in a new location, and with branches in Victoria and Barton, they only indicate their establishment in 1919, which means this building pre-dates the bank being established.

Now, it gets even more complex.  When you refer to the MDAH database, it identifies the former Citizens Bank building as a circa 1916 Craftsman, located several blocks away from the building pictured above and labeled Citizens Bank, and is the same building as described by Helms & Kaye as Dr. Fite's office, which you note above, he built following moving into the former post office/McCutchen/Chalmers/boarding house home.

This is enough to make me tired today, what with traipsing all over Byhalia, even if it was a virtual traipse.  I have pulled up Byhalia on Google maps so many times today, I am probably going to trigger a secret database, most likely operating in the basement of the former Citizens Bank building, if we knew where that might be.  I hope during interrogation, they don't ask me where the post office is.
Posted by Suzassippi at 10:13 AM