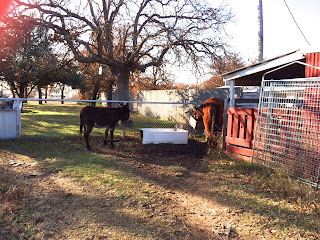 It is not a trip home without a picture of feeding time in the mornings for me, and an update on the status of Jennybelle and Rio.  I got here Sunday night, but it was late and after dark so I did not get to feed until Monday morning.  Rio was happy to see me, took his handful of oats and nickered for me.  Jenny brayed, but would not permit ear scratching yet.  This morning, Rio was out waiting for me by the gate.  He has his winter coat on, and though a few short weeks ago he was sleek and shiny, he has that ruffed fur look now--like the feral cats. 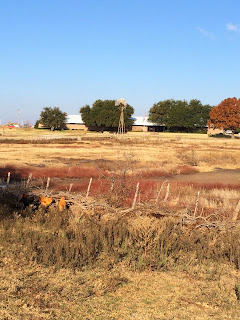 I had put out hay yesterday morning, and made a note to remind everyone that it has to be checked every morning in the winter.  I put out fresh hay again this morning, and then took a minute to walk over to the fence and look at the variety of winter colors evident in the pasture.  The predicted freezing rain missed us, but we did get some rain and the creek is running with a little water for now.  The little golden spots next to the fence row are the neighbor's chickens, as usual. 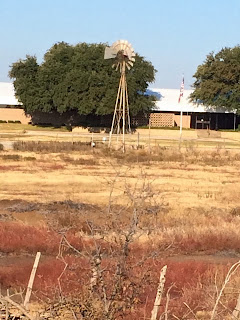 When we bought this place when I was 15, there was nothing out here but pasture land--no roads, no houses, and certainly no businesses.  Several years ago, someone bought the land behind dad and put in a business.  Not long after, the secretary came over and asked dad if that was his windmill.  He confirmed it was.  She said, "Well, it squeaks, and it really bothers us and we would like for you to do something about it."  He told her he would give that some consideration.  My response was if you move to the country, don't expect it to be like the city--windmills squeak when the wind blows. 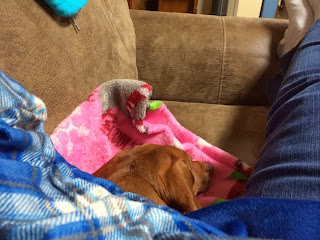 There is something about this time of year in this part of Texas that always makes me feel rather melancholy, and the cold and the wind today--even if the sun was shining--enhanced the feeling.  It has been a long, non-stop day since I got up at 6:30 this morning and started my chores.  I am thankful it was Taco Tuesday and I did not have to cook--especially after waiting an hour and a half at the pharmacy for Dad's new script and the 3 interchanges between the pharmacist and the doctor.  Welcome to small towns.  On the other hand, when the pharmacist came out for the 3rd time to tell me about the new prescription, he said, "How is Bob doing?" and sent him a personal message.   Welcome to small towns.
Posted by Suzassippi at 6:42 PM

As much as I don't like to be cold there is something about the winter landscape that intrigues me. I enjoyed your pictures and got a LOL over the windmill story!

Thanks--funny but today was so different--I think because the wind was not blowing--it was beautiful and I felt so happy! Go figure.