The ice and snow are here; Libby and Kate are getting well; Roadie is hiding

Ten days ago, Libby and Kate got into a fight of major proportions, both requiring stitches, and Libby numerous staples in her head.  It was a traumatic time for me as well as them, as I had to deal with the aftermath.  As always, though, we learn something about the temperament of our dogs, and ways to prevent future rows, though it doesn't make it any easier to get through the one at the time.  They both had to be tranquilized for clean up and repair, and spent most of the next few days sleeping it off--in different rooms. 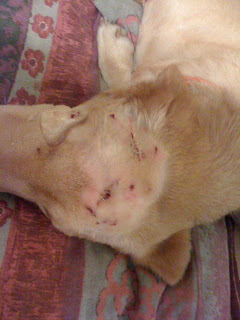 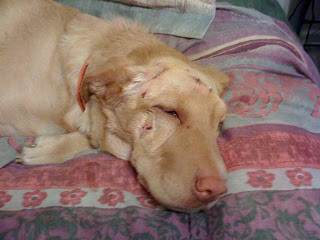 Roadie, the baby, is the smartest dog we have.  When a scuffle breaks out--or in this case, a downright knock-down fight--Roadie heads for the nearest table or chair and promptly gets under it as far back as possible. 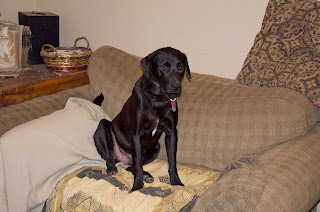 Fortunately after the investment of a mere $283 for vet care and $44 for comfy cones, the stitches and staples came out yesterday.  Libby still has some scabs and healing spots, mostly because with her blonde hair, you can see them easier. 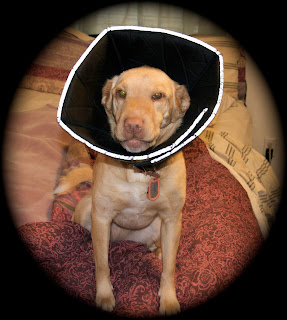 Kate is pretty well healed to the point that her wounds are no longer visible except for the healing laceration on her ear.  We think we may make them wear comfy cones from now on, as it seems to keep them much more laid back.  :)  Actually, we have made the decision that there are behavioral changes necessary in regard to how many dogs in a room at the same time, who gets fed with whom, and who gets to go outside and thus be at the door waiting at the same time.  I had suggested a routine based on my having done this last year while Randy was in Texas and Kate and Maggie got into it; he did not believe it was a workable solution until two days after the Kate/Libby fight this time, Kate and Maggie got into one.  Fortunately, given Kate already had wounds, only the fur was flying instead of blood.  He implemented my plan immediately, and it has worked well so far. 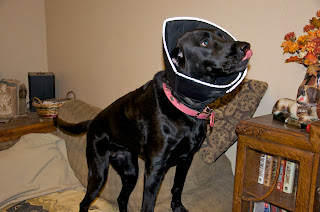 In the meantime, on a cold, raining, and now sleeting Saturday, the cold front is here in full force.  I headed out to my Wal-Mart Fall-Apart, but there were so many people there stocking up (are they expecting snow in Mississippi to shut everything down for 2 weeks or what?) I just drove right back out.  I only go to Wally World when we need something no one else in town has, like today.  I decided it could wait.
I had on my Unalaska hoodie sweatshirt, which is a lot warmer than the Mississippi ones, and it was freaking cold at that.  By the time I left the grocery store, the sleet had started.  By the time I got home, all my jonquils that had just bloomed were lying face down in the mud shivering, and the ice was forming on the newly budded tree branches.  Birds and deer were eating the last of the seed and corn I put out this morning, and about to head for a warmer place to curl up and wait this out. 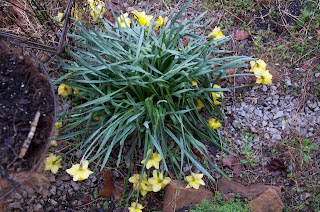 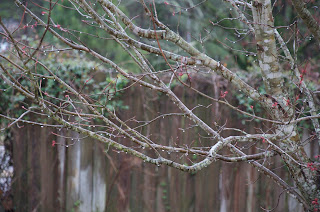 I think that sounds like a capital plan, so I am headed to the living room to light some candles (amazing the heat they emit in the small room with the door closed) and curl up with a warm dog and a glass of chianti.
Posted by Suzassippi at 4:53 PM