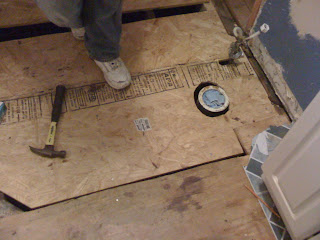 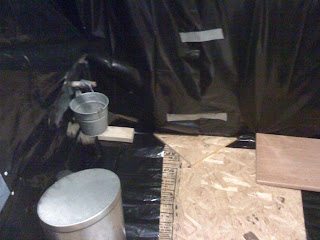 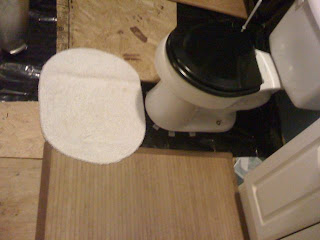 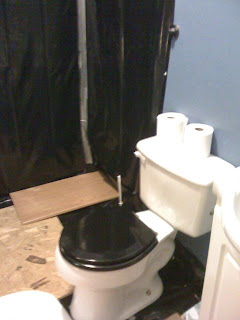 One would not think that putting a floor back in a bathroom would be all that good of a day.  It was freezing (literally 26) this morning when J and I went out to start cutting the sub floor for the bathroom.  He made some comment about the not fun day ahead.  I ventured the comment "I was kind of hoping it would be a day for us to work on repairing our wounded relationship."
[I actually originally wrote what I thought was an important understanding between us, but Randy informs me I was all wrong.  Apparently, I do not have a grasp of reality when it comes to being present in a conversation, but Randy does, even though he was not present.   What an awesome super power.]
I just played "gopher" and if he asked for it, I found it; if he said hand him something, I did; at one point, I said, "I know, I get to be the plumber's helper who crawls under the house into the slog" and he laughed and said yes.
The most important thing (besides working side by side with a son I cherish and having a reasonably good day doing it) was that we got the floor back in half the bathroom, the toilet back in and working, and the sub floor in the other half of the bathroom.  We did not want to put the floor back in that half yet as we need to do some plumbing before we are ready to do that.  It is just great to have the extra toilet back in the hall so we can stop playing keystone cops with dogs and father-in-law for the next week and a half!  I got creative with the black plastic sheeting and covered up the walls (will have to take a few pics later :) and cleaned the sink and toilet and vacuumed up all sawdust and debris from the floor.  I pronounced it leak-free and good to go for the next week and a half.
And right now, that is all that matters. :)
Posted by Suzassippi at 6:43 PM

You are the queen of the blogosphere lately! I cannot keep up with all of your posts but have appreciated all of your thoughts. Nice that things are finally coming together and hope you will be able to sleep more peacefully tonight. Love to R&J and dogs and Chet. And you.

Thanks. :) I think I will sleep well as a matter of fact.