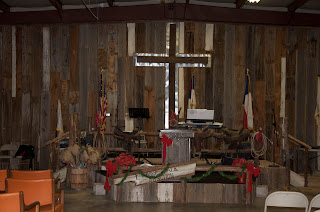 Pam singing. (Picture taken with my iPhone to impress my parents.) 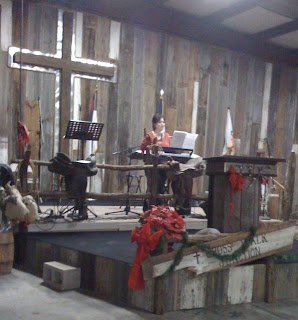 Dad showing me the Christmas tree. 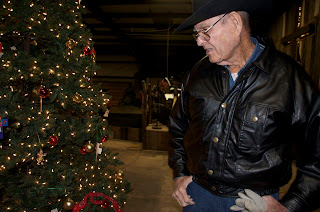 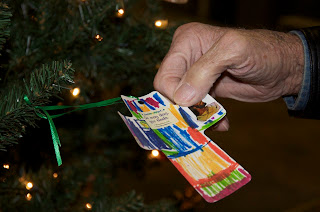 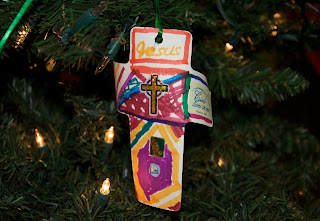 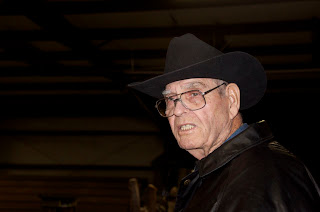 Pastor Will after service, talking to Joe and Jon.  Pastor Will is in the maroon shirt and black hat.  I rode the school bus with Jon. 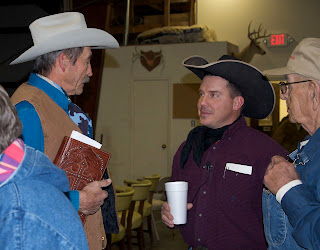 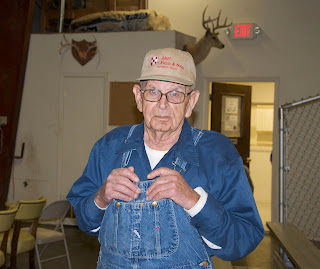 Dad wanted me to go to church with him and mom Tuesday night, and asked me to bring my camera.  It is an arena-based church, thus the western theme.  They took an old metal arena building and have slowly done the work to turn it into a meeting place.  My dad, a retired contractor and carpenter, has helped with much of the work and he proudly showed me around, explaining all the things they had done.
It was a simple service, with singing a few songs, a prayer, and a brief message.  The topic was Jesus feeding the 5,000, but the point Will was making was that Jesus said to his disciples, "You feed them."  In a sense, it was about not asking if a thing was possible, but simply doing the thing.  That would come back the following day to me, in a way I will relate as I move forward through the week.
I met a lot of folks--my dad must have introduced me to about everyone there.  A man who looks like Festus of the old Gunsmoke series came up and asked where in Mississippi I was from.  He had gone to college in a Mississippi school--a small town below Jackson.  I met Joe, one of dad's friends, who hugged me and happily posed for a picture.  Joe has lots of buggies that the church uses, and he had to take me over and show me the picture of his horse pulling one of them.  The horse, Buddy, is a breed that is Clydesdale and something, but I forgot what the something is.  It is like a Clydesdale, only not quite as large.  Joe has not missed a service since the church started, but he was going to have to miss next week.  He planned to come by, start the coffee, put out the cookies, and assist in the preparations so that he could still have "attendance."
I saw a man from my old school days.  He rode the bus with us.  We were among the last of the kids to get on at the pick up, since we were at the edge of town.  Jon was the first kid on the bus.  We reminisced about a few people we had known, and where they were and what they were doing.  I asked him about my first "love" who broke my heart when he dumped me for my best friend.  I told my parents "thank the lord for that now."  He is still living out on his "home place."
Posted by Suzassippi at 8:00 AM

Oh my gosh, this is so Texas. Somehow I think Jesus would feel right at home at Cowboy Church. Your dad can be proud. And I like that message about just doing what needs doing, not asking if it's possible. We get too hung up on the question instead of just going ahead and doing.

Fun to meet all those folks and catch up on old friends. Can't quite see yourself living out on some guy's old home place, huh?!!

I suppose if I had never known anything other than Graham, it might have been okay. But how you gonna keep 'em down on the farm after they've seen Paree? LOL