I've got the rainy day end of the semester blues 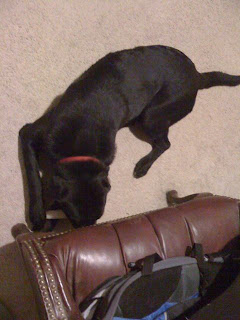 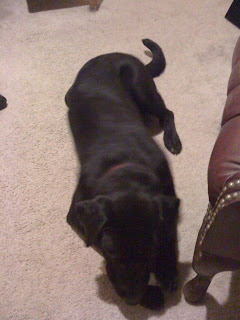 It has been pouring rain all day long, with black clouds and tornado warnings all around.  The thunder right now is almost as loud as the TV as Chet watches something and the surround sound booms down the hall and reverberates the walls all over the house. :)  It is pitch black outside and only 5--early even for us when east of the Mississippi gets dark quickly in the winter.  (I know, Alaska friends--it ain't nothing to be dark before 5 for you guys.)
I have been getting my final exams ready for the next two days and trying to wrap up my grading, in between fielding calls and emails from students who do not understand why they made this or that on a paper, or why a paper is not yet graded or posted.
My new dog Roadie is napping in the floor right now, after I have pulled him off the bookshelf, chair, guitar case, removed the camera from his mouth, along with a bag of potatoes that he drug down the hall.  Got to love him; he's the baby.  I think he is finally worn out (I know I am) and is happy to just put his head on his paws and take a little nap before supper.
He laid in my lap (which for a lab that probably weighs nearly 50 by now is no easy feat for me) last night while I was watching TV with Chet.  Chet kept trying to get him to come to him, but Roadie kept his distance.  However, Kate has been snoozing on the couch with him all afternoon.
Thanks to my friend Jane for introducing me to Shelfari--yet another fun thing for adding to the blog.  I tried to also show the book I just finished, but have not yet mastered that one.  I was able to load the book shelf with the current book I am reading though, Richard Wright's Native Son.  My cousin, who is a journalist and author, recommended it to me the last time she and I were in Square Books.  She said if I am going to live in Mississippi, I need to read that book, and she was right.  I also recommend Sutton E. Griggs' Imperium in Imperio, which is a fascinating novel written about black nationalist government in the south in 1899.  The time of the novel alone is fascinating to me, and will make an impact on anyone's thinking about the issues of race and the south.  It is written by an African American author whose sense of place and time is fascinating, and still timeless.
And thanks to Sarah, Miles, and Elle for the beautiful Christmas card with the family picture.  Jane's girls are the closest to daughters I have (along with my niece Jacq) and the closest to grandchildren I will most likely get.  I get to be "Auntie Susan"--an honorary title in South Africa and I think it fits perfectly for these sweet girls whom I adore.
Posted by Suzassippi at 5:08 PM

I think I read Native Son in college but will have to re-read it. Imperium in Imperio sounds interesting too. Remember when we used to talk about wanting a job where we could just read, think, and discuss? LOL

It actually doesn't get dark here that early in the winter. I think it's staying light till nearly 6. We should really be in a different time zone than we are in. Our problem is not dark at 5PM but dark TILL 10 AM. :)