Dad has walked faithfully three times a week per his doctor's instructions since his heart attack in 1988.  Friday was his walk day, and he wanted me to take a picture of him and Mississippi--the dog he adopted from the Oxford-Lafayette Humane Society.  Bless her little heart, she turned out to be the ugliest dog I think I have ever seen, but he takes care of her and she is a good walking dog.  He starts to walk while it is still dark, so I had to wait a bit before it was light enough to take a photo.
That's Dog in the background.  He came wandering up one day with no tags.  Dad went all over the neighborhood asking about him, and up to the animal shelter, and could not find an owner.  He called him LD for a while, for lost dog.  After it appeared he was not going to be claimed, dad just shortened it to Dog. 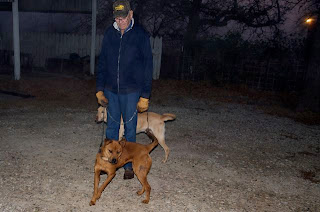 It was a foggy morning and mist was everywhere.  He walks in a pattern around the house now, as he almost got hit by a truck years ago.  About a half/block from their house was a long stretch of empty road and he would walk over there, past the back of his land.  However, one morning a speeding truck veered off the highway in that half/block stretch and since then, he confines his walking to the area around the house, which is large enough once he makes enough circles. 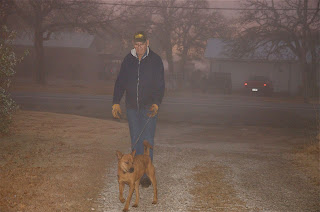 Sunrise in the fog. 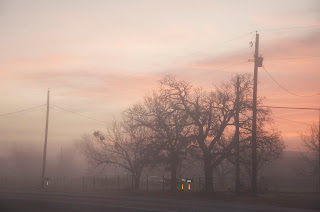 Looking across the pasture behind the house, I could barely make out the windmill for the heavy fog.  When we first moved there, the windmill was the source of our water supply.  It was my and my brother's job to go over to the windmill every afternoon after we got home from school, prime the sucker rod, and start the windmill to pump the tower full of water.  Since you never knew if the wind would blow, or for how long, it was important to keep the water tower full, as well as conserve water.  To this day, when I am brushing my teeth, I turn off the water until I am done brushing, and turn it on to fill a cup, then turn it back off instead of let it run.  Not long ago, I was staying in a hotel with a colleague while we were traveling and she left the water running while brushing her teeth.  Without even thinking, I reached across and turned it off, then had to explain to her what had prompted me to do that. 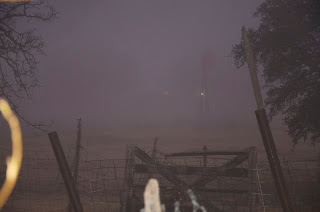 After the walk, dad rests with Tinka.  She is allegedly my mom's dog, but if dad is in the house, she is sitting by him. 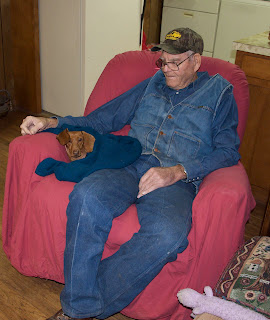 Posted by Suzassippi at 1:45 PM

Love these photos and stories. Hey, you were an environmentalist before it was "cool." I try not to let the water run, either. :)

Growing up in west Texas, we were always conserving water. As my mom once put it, my grandmother washed dishes in a teacup. She always used her dishwater to water plants.

Glad you and Rich are managing the trip well, and hope you continue to have good trip karma. I told Rando and he said, "Damn that Jane, she ALWAYS has good trip karma." LOL

LOL It's true. I shouldn't get too cocky, though. Wouldn't want to give myself a major travel fiasco! Merry Christmas to all you Texasippians.