After spending the morning running errands, I took the afternoon to visit a few places that held significance during my early years in Graham.  First stop was the old courthouse arch down on the Square.  It has been there all my life, and as a child, I recalled standing there looking at it, and trying to imagine the building that once surrounded this arch. 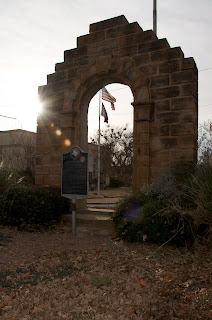 I do not know if this is still true, but at least at one time, Graham held claim to this "honor."  The Square is really like two squares within a square.  In the center is the courthouse and across the street, another "square" area with the old post office, the jail complex, and the Chamber of Commerce.  The inner streets went around that part of the square and cut through the two blocks with a road by the arch.  On the outer area was the regular street, with the businesses on all sides.  Because it covered a two-block area, it was larger than the typical square in most towns.  As a child and young woman, I recalled walking around the square many times, and the old businesses that were there that have--of course--long since disappeared. 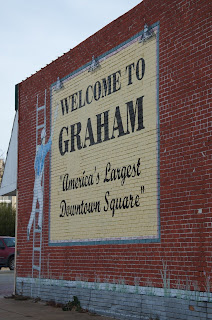 The old post office (the one I remember from my youth) is now a museum.  This metal art work is new since the last time I was down there.  The old Goodnight-Loving cattle drive trail went through the area.  (Loving, Texas is a small town a few miles from Graham.)  The art pays tribute to the history of the area and the influence that the early cattle industry had on the area. 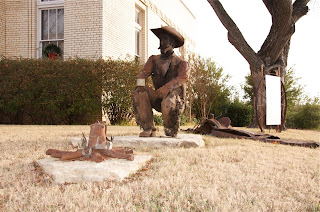 The first show I remember going to see at the National was "Journey to the Center of the Earth" starring Pat Boone.  My grandma took me.  The National went through a 'seedy' era for a while, with most folks going to the other theater (now no longer there except for the building) or the drive-in--popular for the obvious reason that one watched it from inside a car. :)  As an adult, I went to a movie here in the 70s with my then-husband, but I have no recollection what it was.  I recall it still being pretty seedy looking at the time, however. 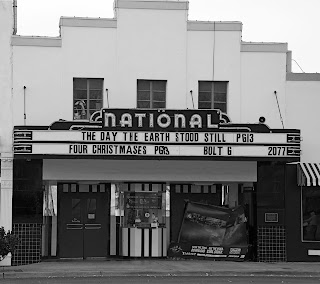 I headed out to Fireman's Park to visit "the Red Hoopie" but they have moved the opening to the park.  (The Red Hoopie was a merry-go-round type of 4-seater that my friends and I used to use.  Just wondered it it was still there.)  Searching for a place to turn around, I headed down the Power Plant Road.  When I was in high school, this was known as "Tesco Village" due to the houses located there for the management of the power plant staff.  Tesco stood for the Texas electric "something" company.  I used to wonder what it was like for the people who lived under those electric lines, towers, and so near the plant.  Allegedly, the village was moved due to some concerns about the inequity of providing housing for some but not all.  (Housing in gasoline camps, power plants, etc, was quite common during that time.  My husband grew up living in company housing in the gasoline camps of west Texas as his dad worked for Phillips 66.)
In later years, of course, we would discover the health dangers of living near these power lines. 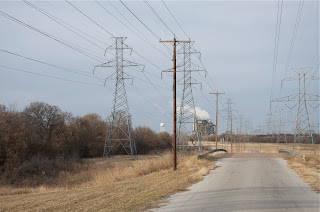 I always thought the power plant at night was like a big old castle.  In December especially, the lights reflecting on the water of Lake Eddleman were so incredibly beautiful.  I intended to get out there and take a picture of it at night before I left, but sometimes our best intentions get waylaid by events we cannot control.  In the first house we lived in when we moved to Graham, just a short walking distance from the lake, one could go outside in the yard at night and hear the sounds of the power plant.  My friend from next door and I used to walk over to the lake a lot to look at it, and it was the scene of couples parking many a night. 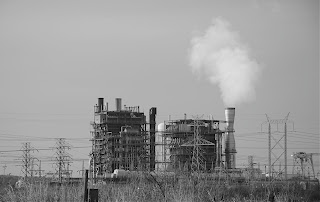 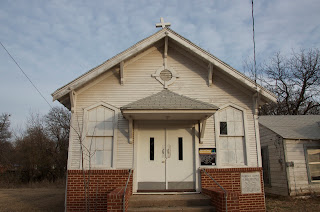 The last loop I made was through the section of town that had been known simply as "Colored Town" when I was a child and growing up.  As a child of the 50s and 60s, of course I grew up in the segregated life of the south.  It was a fairly good-sized community for the size of the town, I suppose.  I remembered the many houses, churches, and a few businesses that operated there.  By the time we moved there, they had built the Lincoln School (the elementary school for black children) behind the neighborhood, and we could see the children walking to school as we rode the bus by.  The high school was integrated, though all of the black students except one always kept to themselves in their own groups.  One guy was in my class, and he was tri-captain of the foot ball team and all-school favorite my senior year. 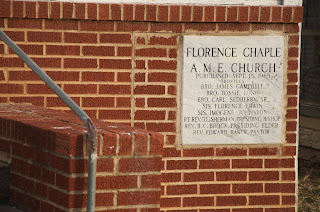 I noted on the corner stone to the church his family name--Sedberry and wondered who he was in relationship to my class mate.  As I drove through the neighborhood, I noticed there is little remaining.  There are many empty lots, with little to indicate that a home once stood in that area.  There are still the two churches, but one is certainly overgrown with weeds (Mt. Zion Baptist) and I do not know if it is still in use or not.  This church had a schedule posted on the door, and a name change, so I guess some services are still held there.
The Lincoln School is now apparently a business, and was fenced off with trucks, etc, in the old school yard.  I was also surprised by how small the school really was, when in my memory it was much larger. :)  I saw one young man out working on his car, and he waved in response to my wave.  There were still houses, some appearing vacant and in sad disrepair, and others clearly inhabited with Christmas lights on them, and vehicles in the drive.  I wondered if anyone was inside, looking out the windows and wondering why a truck with Mississippi tags was slowly driving through the neighborhood.  I do not know if it remains a black neighborhood, but the sole person I saw was black.  I wanted to stop and ask him about the community, but he appeared so young I did not know if he would know, or think me strange--some middle-aged white woman with Mississippi car tags wanting to know about it.  In retrospect, I wish I had taken the chance anyway.
Posted by Suzassippi at 11:17 AM