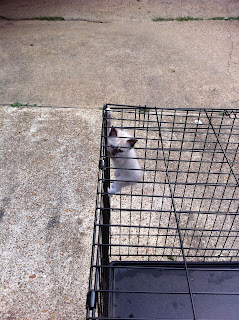 Randy came in from getting the mail this morning and announced he knew why Felix was on the side of the road.  Three kittens were by the mailbox and scampered into what he thought was a cardboard box.  He said they looked to be 5-6 weeks old, and wondering where Mama was. 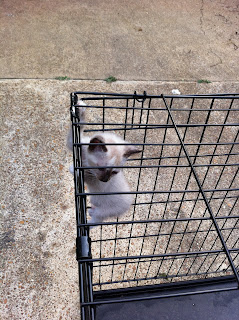 This evening, we went down and put the puppy kennel around the "house" which turned out to be an old mailbox (you think Rando needs new glasses?).  We were able to get the one kitty right off, but the other two escaped.  However, we waited an hour, went back down, and they both ran into the mailbox.  Up went the puppy kennel and we had the other two.  I don't know how long they could have/would have survived in the heat without food and water.

So, we now have 3 kitties on the back porch so they can be protected from outside predators.  They are all bob-tails--the white one who looks rather Siamese, a black one, and a brindle.  I put some water in the kennel, and some cat food softened with warm water, and they have eaten a bit.  We put a cardboard box in for them to be able to get shelter and privacy, and so far, so good.  I'd like to try to socialize them a bit if possible and get them on kitty food before trying to place them.

The circle of life comes with both pain and joy.