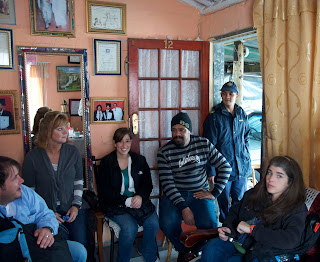 Aunty Goliath prepared tea for us for the morning visit to the Kleinflei community, and as always, invited the police to stop by.  In addition to the officers (who provided our escort to the station to see the trauma room where they interview and assist victims of violence), one of the detectives spent some time discussing the various community issues with which they deal. 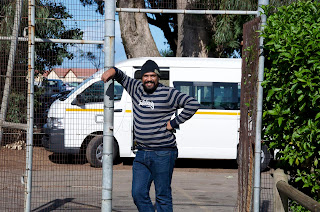 Jacques, in the Family Preservation Program at Marsh Memorial, was our driver for the day.  Because we had a lot of driving to do that day, Marsh Memorial was generous enough to provide Jacques and the Quantum for transportation.  Many thanks to MM, and especially to Jacques, who still had his casework to do after spending a long day with us. 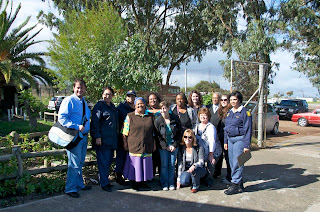 After our morning at the community health center, community garden, and police station, we had lunch at the hospital while we waited for our afternoon presentation by the Allied Health Staff--the chaplain, dietician, physiotherapist, and social worker.  They staffed 3 cases for us, explaining how they worked together and the issues with which they deal.

Afterward, Dr. Tim Visser, the CEO of the hospital, talked to us about his vision for the hospital and community, and took us on a tour of the hospital.  ERH is a publicly funded hospital, operated by the Department of Health.  It was a beautiful facility, with art and cultural decorations--all part of the vision of the hospital and their holistic care.  We saw the Kangaroo Mother's program for premature and low birthrate babies, which is based on the idea of skin-to-skin contact.  There has been significant research about its effectiveness. 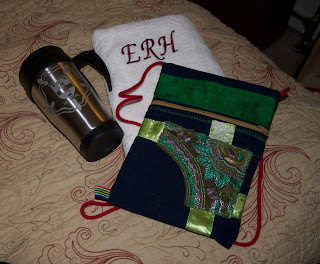 They gave us each a gift of a bag (and I got extra, because I was the professor--my own mug and towel!) made by a local group from recycled materials.  Dr. Visser made the analogy about recycling--using things that have been thrown away to make something new and beautiful.  I think Dr. Visser really "got" social work, and the holistic approach to care, and his staff clearly respect him and he respects them.  I must say, I loved my bag, and it was perfect for carrying my money and passport and keys.  I especially loved it on my flight over to Port Elizabeth the following week.

We did a dusk walk-through of the African township of Mfueleni.  Dr. Visser wanted the team to see the environmental context in which many of their patients are released.  As we walked through a community that had no sidewalks, he asked us to imagine someone trying to navigate the narrow and rocky paths in a wheelchair.  There was no water other than a tap every several blocks, and he asked us to think about someone who has to keep a wound clean and re-bandaged without ready access to water.

I have always felt welcomed into the communities in which I visit--primarily because I am with people who have "sanction" to be there--and this was no different.  People in doorways smiled, spoke with us, and in general, our presence did not seem unusual to them.  One amusing moment came as we were walking a narrow pathway between several shanties and the doctor said to move a little faster.  He spoke several languages, and overheard residents saying, "The whites have arrived."

We completed the evening at the Pomegranate Restaurant at Vergenoegd Wine Estate (Dutch for "satisfaction has been acheived") with a delicious dinner prepared by Chef Mike Israel--whose descriptions of the food were almost as wonderful as the food itself.  I had a lovely tomato tart for starter, followed with game, and a decadent chocolate crepe with brandy sauce for desert.  It was quite late when we finished, and we were all tired, but none more so than our driver Jacques, who still had to drive 30 minutes back to his home after he dropped us back at Marsh.

Dr. Visser said he thought it important for us to reflect on the day and its many contrasts, which was why he picked the wine farm to complete the day's events.  As we were driving out, he asked if anyone had noted the slave bell, and how the entire farm was built to focus attention on the manor house (where we had dinner) and away from the lives of the laborers. 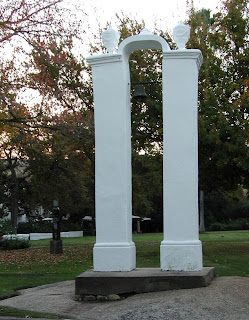 This slave bell is on Spier Farm, and was my first introduction (in 2003) to the method of calling laborers to work on the farms.  I shared my thoughts on the originally-planned Civil Rights Monument at Ole Miss--which distinctly resembled the slave bell in its form--and my thoughts about re-interpreting it to mean calling scholars to learn rather than laborers to work.  We had a subsequent discussion about whether or not symbols of oppression can be re-invented.
Posted by Suzassippi at 7:28 AM