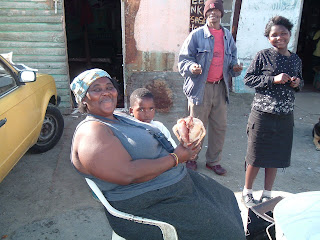 Back in 2004 while I was doing research in Khayelitsha, I often had the opportunity to talk with women.  I found that for many of them, life was not all that much better.

While I was there, an article came out in the paper about the results of the "happiness survey."  It indicated that white males were the happiest and African women the unhappiest.  They had asked women living in the squatter camps: the informal shanties with no access to water, electricity, or services of any kind.  In their conclusions, the authors had indicated the results of the survey disproved the "whining whites" theory.  I don't know where the authors learned their research methods, but I learned you don't prove or disprove with research: you can infer meaning from the results.  Since I don't have the full report in front of me, I can't really say how they interpreted their results, but I am fairly confident that just because whites rated their happiness higher (based on factors like income, satisfaction with work, etc.) that does not mean they don't whine.

I looked up the happiness survey, and indeed found that immediately after the democratic elections in South Africa, the happiness quotient for Africans was quite high.  Ten years later, in 2004, it was the lowest of any of the racial groups in South Africa, not surprising to me.  That's the thing with sudden democracy, according to Naomi Klein.  People have an expectation that life will get better, and then when that does not happen,  how does a fledgling democracy handle that growing frustration of the have nots?

One thing I did observe on the recent trip last month is a growing dissatisfaction with the government.  I recall a colleague telling me back in 2002 "It's one thing to fight the freedom fight, and quite another to govern."  There was a general consensus among many that the ANC had failed to deliver: promises had been made and not kept, government officials had prospered and the majority of the people had not, and there was a desire to see change economically as well as socially.  Reminded me of the US.  I'll follow up with "The Toilet Wars" next.
Posted by Suzassippi at 8:18 AM