Right now, of course, one cannot open a web page without seeing it filled with stories about Mr. Mandela.  While I held deep respect for him for so many reasons, including loving the sound of his Xhosa name-Rolihlahla (pronounced roll ee sla sla), I did not think I could add anything more to what has been said of him.  Until this morning, when I went to make this post and ended up so far from where I thought I was going.

No, I do not have anything pithy or yet unsaid to say about Mr. Mandela, but rather, about his name.  I learned only this morning that his Xhosa name meant "pulling the branch of a tree" but was more commonly interpreted as "troublemaker."  I thought how fitting, and how honorable--or as they spell it in South Africa--honourable.  We need a lot more of us pulling the branches of trees, doing some troublemaking--not the mischievous kind, but the kind Mr. Mandela did, fighting the wrongs of evil systems.

When I was home during Thanksgiving, I went up to the high school to take some photographs as I recently learned that the school was a New Deal project.  It was built by the Civilian Conservation Corps in 1939.  Of course, one can not go to where one spent the majority of 4 years of your life without experiencing some thoughts and memories. 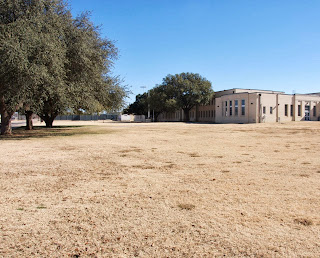 Upon parking, the first thing I saw was the bank of trees on the left and was flooded with a memory.  Under the tree is where all the black students stood while waiting for the bell to ring.  It was 1964 when we began as Freshmen, so for 4 years as I walked around the side of the building to the front door where all the white kids stood waiting for the bell to ring, I would see them out there.  It was a fairly small group--maybe 10-15 students if that many.  My freshman annual would show 4 black students in my class, and only one of them would be in my senior annual 4 years later.

None of this is surprising, but it has stayed with me for two weeks now--the pain of remembering that, and the troubling pain of remembering less than that.  It has been juxtaposed against the experience of apartheid--which I would also not know was raging on another continent as I walked the halls of this school, separated from students who were not the same color as I was, even in the same school building.

It is troubling that I would not learn of Soweto or Sharpstown or District Six until many years later, as an adult, when apartheid ended. Only yesterday did I learn of the music boycott of performing in South Africa and the song "I ain't gonna play sun city."

I cannot go back and undo what I did not do because I did not know.  But I can make sure that I know now, and that I can stand with my co-troublemakers in exposing and opposing evil systems and evil things.  There is a cost in speaking out, but it is not greater than the cost of failing to take action in the face of evil.  There are way too many people still standing under the trees instead of at the front door.
Posted by Suzassippi at 12:12 PM

Thanks for a thoughtful and inspiring post. I did not know the translation of Mr. Mandela's name but it does seem fitting and also a fitting call to the rest of us. I have similar memories of growing up in segregated Georgia with whites-only water fountains and bathrooms, etc. I went to a Catholic school while in GA and don't recall anyone other than whites in attendance so did not experience the separate waiting areas (just separate schools altogether, I suppose). Then we were in Germany for four years where we attended school on our AF base which was fully integrated. By the time we returned to the States, there was still some self-segregation but nothing official any more. Being AF brats, we grew up with people of all cultures so I never understood what the "big deal" was. Friends were friends. But I know that is not the way a lot of the civilian world looked at it.

I loved the Sun City song when it came out and I remember being proud of Steven Van Zandt for writing it and organizing the artists to work together on the project. He's the guitarist in Bruce's band, which is probably why I knew about the song (groupie that I am haha). I don't think it got much airplay--too controversial, you know! It was fun to see the video again after all this time. Wow, some of "my boys" look awfully young. :) And check out Bono's mullet. lol

I don't think there's anything I can say about Mr. Mandela that has not been said but I hope people will take his life to heart and strive to bring about justice in the world. We definitely need more branch-pullers to accomplish that task.

I went over to my friend's house last night with some shrimp and grits and I was telling her about the tree. She said, "And now you know why they were all out there, don't you?"

I knew you would like Van Zandt and Bruce. :) You know what is even more strange to me is I started my MSW in 1986. Wouldn't you think apartheid might have come up in a class or two?