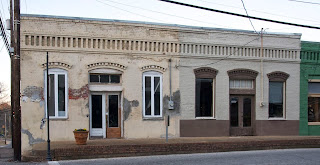 Burrow's Store on Church Street in Byhalia was actually two stores.  James Lafayette Burrow owned both buildings in the sequence, and they were connected with an entrance between them (Helms & Kaye, 1995, National Register of Historic Places nomination form).  The Commercial Italianate building was constructed in 1885 "with the coming of the railroads" and closed in 1972 (Helms & Kaye). Number 2446 on the corner was a dry goods store, and a tavern was located in the basement.  The dry goods store:


One-story, flat roof…brick building with corbeled parapet. The windows are segmentally arched and fixed with denticulated header archers. The doorway has a 4-lite transom overhead and the door is doubled with one lite per panel. (Helms & Kaye).

Unless I miss my math, the transom over the corner store is 3-lites.

Number 2444 next door was the grocery store. Helms and Kaye described it similarly:


One-story, flat roof...brick building with false parapet and corbeled parapet.  The openings are segmentally arched with denticulated arched lintels.  The doorway is a 1-lite, 1-panel, double door with a 4-lite transom overhead and the windows are fixed.

The two stores appear almost identical, with only the windows and the transom over the door differing. The 1995 photographs in the nomination form show the windows on both stores were both one fixed lite, rather than the two-lite windows in the corner store.  The transom on the corner store was covered with a wood sign, so it is also possible that the 3-lite transom is a replacement, or else, being not visible, the assumption was made it was 4-lite.

Number 2442 Church was the Bowens Store/Gardner & Jones Store, commercial Italianate, constructed in 1884 (Helms & Kaye).  They reported the 1915 Sanborn map and History of Byhalia


indicate that the mercantile businesses of the Bowens Store and Gardner and Jones Store were located side-by-side.  The tax card indicates that Dr. Hammack had an office here.

The windows of the Gardner and Jones store have been filled and a modern plate glass installed, but the arches remain visible.

While there is still more to explore in Byhalia, that's it for the mini-downtown tour; the rest will have to await another day, and one that starts a bit earlier in better light.