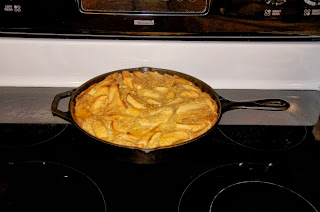 Because today was Saturday, and the semester is over, and I slept until 9 a.m., I decided it was a good day for Lana's Apple Skillet Cake, aka "Dutch Baby Pancake" for breakfast.  It turned out pretty--prettier, in fact, than the first one I made, but it does not taste quite as custardy and is missing something that was definitely in the first one (photograph below). 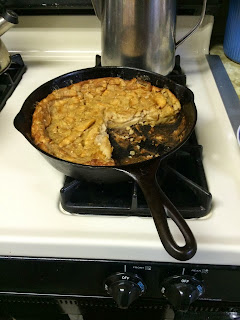 Ever practical Randy said, "You were cooking with gas in Graham."  It's true--I prefer gas, and it cooks better to me.  It could be because I grew up learning how to cook on a gas stove.  But, there may be some other things at play as well.  Before I go any further, be assured that this pretty and easy little breakfast/dessert is still yummy, and is definitely on my keeper list.

Although Lana's recipe called for Granny Smith apples, I used Gala the first time as I was shopping without the recipe and did not remember that.  I am not really a Granny Smith fan, so I had Randy get Gala this last week…only he got Fuji.  Both stand up to baking well, so I did not think it would be that much of an issue, but I sense it affects the flavor a bit.

On my first effort, I discovered during the prep process that Mom had no brown sugar.  Not daunted in my desire to make this recipe, I just mixed a bit of molasses (1 tsp) with the 2 tbs of white sugar, since that is all that brown sugar is anyway.  Perhaps it was that tangy B'rer Rabbit molasses that gave it such a different texture (much more custard-like) and a darker color, but it might also have contributed to the uniquely caramel-like bread pudding taste and texture as well.

Now to be sure, in less than 15 minutes, the current version of apple skillet cake is gone, and I have had one tiny serving.  Clearly, J and Rand were undaunted by the minute difference I noted in the two versions…but to be fair, neither did they taste the first version.

There is just nothing left to do but in the name of scientific inquiry, I am compelled to make it again next week while I am in Graham, using Gala apples and B'rer Rabbit molasses, in my dad's well-seasoned cast iron skillet using the gas cook stove.  Then, on return to Mississippi, I will have to make it again, using those exact same ingredients, minus the gas stove and dad's skillet.  That will narrow some of the spurious details enough that I can at least rule out the electric vs. gas theory, and the not-as-well-seasoned cast iron skillet vs. the lifetime seasoned cast iron skillet theory.  Once I check those results, I'll determine if I need to do the comparison again without the molasses and Gala.  Heck, maybe I will even try it with those Granny Smiths.  I sure hope Lana overlooks my experimentation with her lovely recipe, but truth-be-told, I have been tinkering with my version of recipes since the first time I started trying to figure out how to make parmesan-crusted red-pepper catfish without a recipe.

I recently read a story about Chef Andreas Viestad who said his goal is to use tomatoes every day and never have the recipe taste exactly the same way.  Challenge accepted!

I made one the other day and the texture was totally different. I don't know what I did. All the ingredients I used were the same. I think something like this can be effected by the weather, so that's what I'm blaming it on. And the apple can change the flavor too, I've used galas and granny smith. I like the galas because they cooked down more. Glad you're enjoying the recipe and please feel free to tinker away with it. That's what good cooks do!

I think one thing I did was not let it "set" long enough. The one tiny piece left later (what is it that compelled J to leave one bite?) was more like the custard texture, and therefore, tasted different.