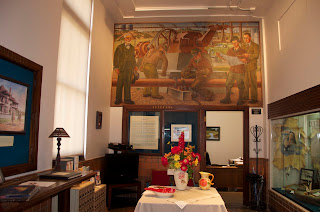 Alexandre Hogue, University of Tulsa Art Professor, Emeritus, painted "Oil Fields of Graham" in 1939.  It was once painted over during a post office repainting, but has since been restored and preserved.  The mural hangs inside the art moderne post office of Graham.  Postal services were relocated to a new building a number of years ago, and the old post office serves as a museum.  Hogue's painting was one of many created under the Treasury Section of Fine Arts programs during the New Deal Administration.  You can read about the tremendous influence of the New Deal on economic and community development and benefits to a wide range of workers (including artists, engineers, skilled and unskilled laborers, teachers, etc.) at the Living New Deal project.  While we all benefitted (and continue to benefit even today) from the investment in people and communities under the New Deal, if you had a personal involvement, drop me a line and share your story. 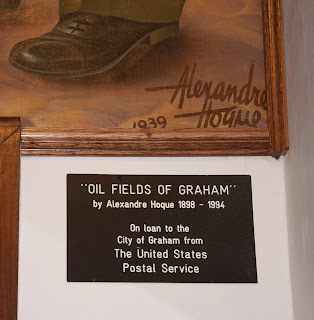 When I first found out there was a mural in the Graham post office, I marveled at how I could have gone in and out of that post office so many times and had no recollection of the mural, which hung in a prominent location just inside the lobby.  After learning that it was painted over, I think that answers my question:  I don't recall it as it was probably not visible during those years.  It was restored many years after I left Graham.  Thank goodness there is a plausible explanation for why I could not recall ever having seen it--made me feel a lot better, given I too often have to pause and think "now which password is it for this account?"
Posted by Suzassippi at 11:19 AM

(Raising my hand)I know Jacob's Ladder! I'm so glad this was able to be restored - I can't imagine why anyone would paint over anything but they do.

Yep, and there was some dry macaroni in there, too!