San Francisco native Suzanne Scheuer secured the commission for the mural in the Eastland, Texas post office during the Treasury Section of Painting and Sculpture program operated under Roosevelt's New Deal Administration.  She painted the canvas in 1937 and brought it to Eastland to install in 1938.  Scheuer was 38 when she painted Buffalo Hunt.  She also painted Indians Moving for the Caldwell, Texas post office in 1938, which featured a similar topic--life of the Plains Native Americans.  Was the depiction historically accurate for the area?  I'll get to that in a bit. 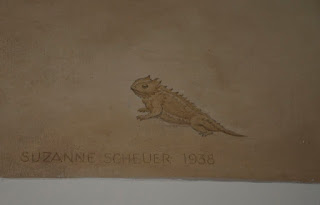 Scheuer included "homage to Ol' Rip" in her mural, which is historically accurate, or at least as accurate as local lore can be.  Ol' Rip was said to have been interred in the cornerstone of the courthouse when it was erected in 1895.  I personally do not understand the thinking of the mayor and other officials who would consent to burying anything alive, even a horned lizard, but then people did (and do) far worse things for "entertainment."  When the courthouse was demolished in 1928 to build a new one, the cornerstone was opened and supposedly, in front of a crowd of thousand, Ol' Rip emerged alive.

At least someone agrees with me.  Note the editorial from Texas Escapes:


As a public service announcement, we would like to point out that TheTexas Horned Toad is an endangered species and should not be placed in cornerstones. It was this sort of nonsense that put them on the endangered list. Mere possession of one can result in a $500.00 fine and a second conviction can result in a 90 day jail term and a $1000.00 fine. If you are found with a horned toad and a Barton Creek Salamander you will be drawn and quartered by Clydesdale horses. 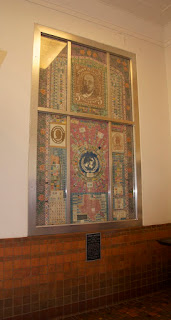 Though not part of the Treasury Section of Painting and Sculpture projects, nonetheless, the stamp mural completed by Postmistress (1957-1968) Marlene Johnson is worthy of notice.  Johnson used 11,217 stamps and 7 years of her personal time to complete the mural. 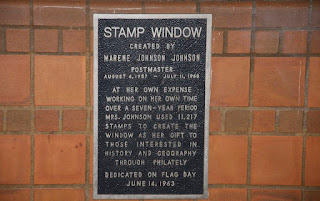 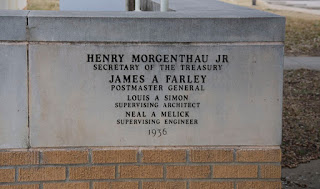 The post office was completed in 1936 and its design features some details I have not observed in other post offices--the bas relief designs on the front of the building, in a transportation theme. 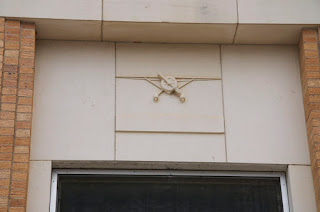 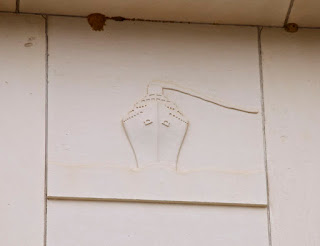 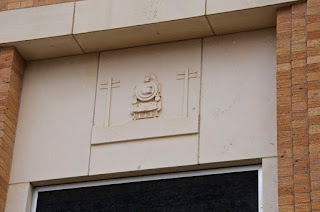 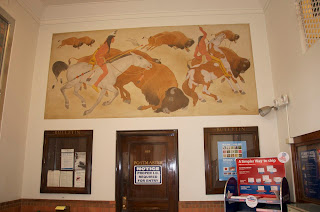 Accepted themes in the post office murals were those depicting labor, everyday life, the industrial, agricultural, or other economic basis of the community, or those representing the history of the community.  The topics were not without controversy (R. L. Stevens & J. A. Fogel, 2010, Conflict and consensus: New Deal mural post office art. National Social Science Journal, 33,2).  Although I found no indication of conflict regarding Scheuer's mural depicting Plains Indians, Seymour Fogel's proposed mural of an Apache dancer for the Safford, Arizona post office created such a furor that it had to be scrapped.  There was conflict between Eastland county settlers, the Kiowa and Comanche during the 1860s (Leffler).  While the Eastland residents may or may not have protested the topic, it is may lack accuracy as far as the area of Eastland county.  According to the Texas State Historical Association, although Comanche, Kiowa, other other plains Indians were in Eastland County,


...the region was too heavily wooded for the extensive migration of buffalo into the area. (John Leffler, "Eastland County" in Handbook of Texas Online.)

Suzanne Scheuer also painted murals for the Berkeley Post Office and San Francisco Coit Tower.
Posted by Suzassippi at 11:26 AM