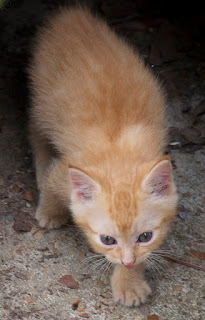 It's been a fairly leisurely weekend since I had my post-surgery check-up on Friday.  I am continuing the exercises and walking, and my regime now includes going back outside to feed the birds, cats, and to sit out in the evening and watch them play.  Lots of effort at up and down, bending knee, lifting knee, and it seems more enjoyable to do it outside with the kitties.  J always names the cats, but he has not done so, and after a while of "hello baby kitty" I start calling them something.  With no imagination whatsoever, I started calling the little Calico "Callie" and this her "Sissy."  They are very socialized to humans with all the time J spends with them, so even though I had never picked them up, they had no qualms about coming to me when I put my hand down, and allow me to pick them up, pet them, set them on my chest. 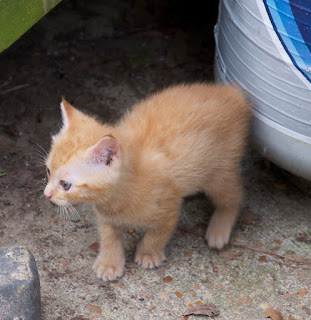 They are pretty adventurous, or at least, Sissy is.  They run under the steps when they need to hide, but are having a great time exploring the front yard--at least as far as the sidewalk.  I have not seen them venture into the grass yet. 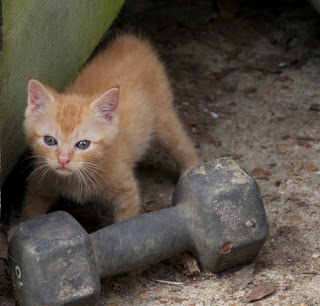 I am not certain if it is a trait among calicos, or just the feral ones around here, but Callie is more inclined to stay to the background, although she will let me pick her up if she is close to me.  J thinks he wants to keep Callie.  I reminded him how well that went the last time he tried bringing one of the kittens into his room, but he said he was just not adequately prepared and had not thought it through. 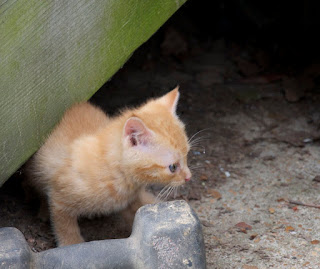 Rand fired up the lawnmower just about the time I came outside with the camera, so that put the picture taking on halt for a bit.  Callie scampered under the steps not to venture out again, so I guess I will have to try for a picture of her later. 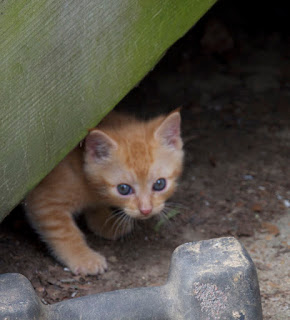 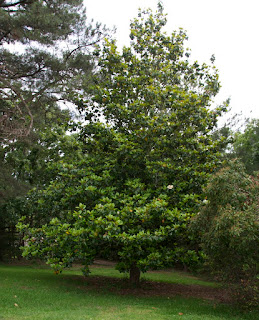 The magnolia tree is starting to bloom, which is always my favorite thing this time of year.  The smell fills the yard, and reminds me that this magnolia tree was one of the reasons I wanted this house.  In hindsight, it would have been better to have bought a house and planted the magnolia later. 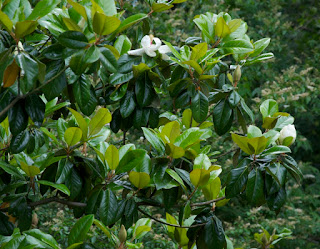 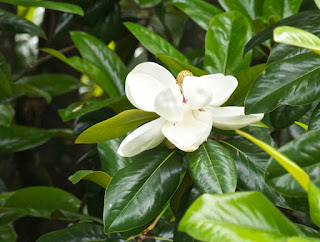 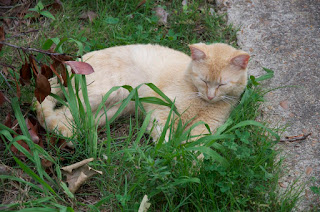 We are mostly finished with cutting down the bush (actually, a tree, shaped like a bush) that the ice storm nudged over on its side early in the spring.  Tails likes to curl up next to the fallen branches and take his naps. 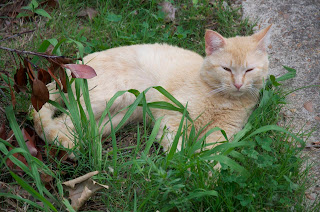 He was annoyed I woke him, but shortly thereafter, Rand came right across here with the mower, and Tails' little nest is now gone anyway.  Not to worry, he will find another spot to claim.
Posted by Suzassippi at 6:09 PM

Kittens and magnolias, two of my favorite things!