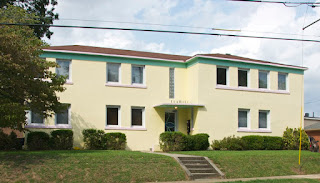 This cool-looking Art Moderne building has entranced me ever since our first trip to Oxford in 2003.  Last week, we were driving by and Rand commented, "I wish those people would get out of our house...of course, since it is within crawling distance of the Square, it will probably sell for 5 million dollars."  Oxford loves its Square, and identifies everything as within x blocks/miles of the Square.  I don't know what it might sell for, but I looked it up today, and one of the four 2 bedroom/1 bath apartments rents for $1,500 per month, with a $1,500 security deposit: next available August 2013. That would probably be a surprise to architect James T. Canizaro, who received a commission in 1937 to

...design a sleekly modernist concrete apartment house...a mildly regional version of the radical International Style...(Thomas Hinds, 1996 in William Faulkner and the Tangible Past: The Architecture of Yoknopatawpha County) 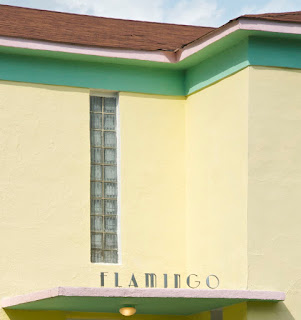 The building combines some of my favorite things: color, glass blocks, corner windows, and simple lines. 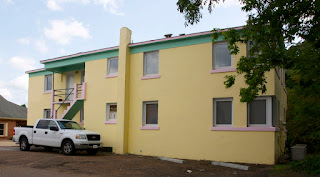 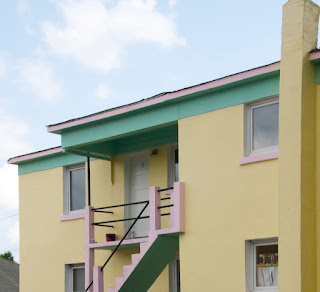 It's common to see a bunch of college guys out in the front, cooler of beer, sitting in the ubiquitous portable red or blue Ole Miss sports chair, or sometimes tossing a flying disc or football.  Here, it appears they left the beer cans on the back steps of apartment number four. 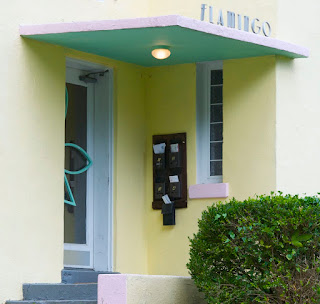 The Flamingo is part of the local Oxford Courthouse Square Historic District, and since 2009, part of the South Lamar District in the National Register of Historic Places.  Canizaro's work on the Flamingo introduced him to the Mayor and City Council, and resulted in his opportunity to design the modernist City Hall completed in 1938...and demolished in the 1970s.  Canizaro's City Hall, Holley's Auto Garage, and the Art Deco facade of Ruth's Dress Shop were all demolished--removing any traces of modernism.  Surprisingly, the Flamingo survived.
Posted by Suzassippi at 3:12 PM

I could live there! We could get adjoining apartments in our golden years. :)

What a great building! I am jealous that the coast does not have an apartment building anywhere near as cool. The poor windows look like replacements. Do you know if the light configuration changed at all from the originals?

I don't find any early photographs or information on the Flamingo other than the brief info on MDAH and the excerpt from the one article.

I'm moving to Oxford in August for grad school and am completely entranced by this building...do you know if they have a website? I've googled to no avail. Love your blog, too :-)

Thanks for stopping by, Kate, and thanks for the compliment. No website that I know of. I found it in a site about Oxford rentals, but since it has been a while, I have no idea which one.

Good luck on the move and grad school!

The old Flamingo...I actually lived there in the late 90s. I was certainly a lot cheaper than it goes for these days. A bit of trivia: The is a movie called "The Gun in Betty Lou's Handbag", and a few scenes were filmed in one of the apartments.

I love this! (Of course!) Great photos.

Of course you do! Mr. Stilts is on the door, you know.

Yes, Thomas Rosell, the windows are replacements. The original windows were paired three pane crank outs. My maternal grandparents built the Flamingo. The architect, James T. Canizaro, was from Jackson and long before my parents met his daughter was a close friend of my paternal cousin there. As I say, if you're from Mississippi, either you are kin or you know kin.