Finally Friday...put on some Garth 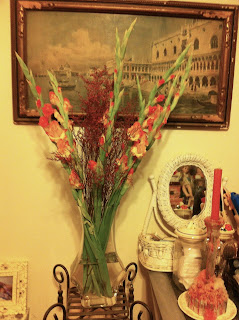 It has been an odd week here, filled with unexpected things, a good deal of productivity, and frankly, I am ready for a break.  Abby is snoozing by my side, for some reason this morning in a mellow mood rather than wanting to play.  It is cloudy this morning, with some red sunrise appearing, so we may be in for some more rainy weather again...just in time for Randy's planned motorcycle excursion to Memphis tomorrow.  I guess we will see how that goes.

Coupled with days and days of rain, which makes the yard just jump up knee high over night, the lawnmower is on the blink.  First, it was the tire and wheel, and we had to wait for those to come in.  Then, it was the battery, so we had to wait to fix that.  Now, the gas won't get up in the fuel line to the engine.  So, great, Abby and I are making the trail to her spot by stomping through the grass, while I hold my skirt up so nothing unwanted crawls up when I am not looking.

I put her out in the backyard for a while yesterday afternoon, hoping she might run off a little of her afternoon energy--that is her most active period of the day, and she can be wild.  What did she do?  Sat on the ramp by the back door, waiting to be let back in.  Reminds me of Kate, whose idea of going outside is--on one of her long days--about 2 minutes.  Apparently, Abby only likes outside if I am with her, letting her sniff her way across the yard, pick up pine cones, and chase the cats to the end of her leash.

On the productive part, I was able to adhere to my writing schedule this week for the first time since the semester began, and made major headway on the manuscript.  I completed draft 1 of the first part of a four-part manuscript--which does not sound like a lot, but required 2 days of non-stop writing from 8-5.  I completed the detailed out-line the week before the audit, but once that hit, there was no more time for writing.  Audit is over and done after last week, so hopefully, things can get back on schedule, at least until the "next thing" that can demand priority over my schedule.

As much as I would prefer the peace and quiet of this room with Abby curled up next to me, once again, it is "into the breach."
Posted by Suzassippi at 7:08 AM