Time to visit with Abby again 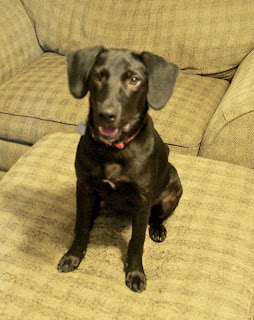 Saturday has rolled around again and Abby and I have been busy.  She just finished lunch and is in her playtime before nap time.  She is learning "sit" but it is much easier for her after she has eaten than when she is ready, and after she has been outside instead of wanting to go.  Good manners dictates that she learn to sit for her leash, sit and wait for "okay" to eat, and sit before the door is opened.  Otherwise, you have a dog jumping on people, unintentionally injuring, but doing so, nonetheless. 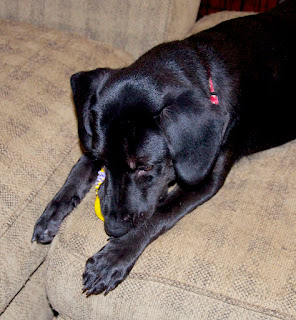 We are down to one toy now, as she has become the queen of desqueaking a plush toy and ripping out the inside stuffing before I can see what she has done.  I made a sweep under the chair and ottoman this past week and found all the other toys, but in short order, Miss Piggy, "tough" Woof bone, and the spotted bone have met their demise, all in the same day.  I have to go shopping this afternoon for new toys.  She--of course--can't annihilate the baby kong, and it gets to go in the crate with her when she is unsupervised while I am at work. 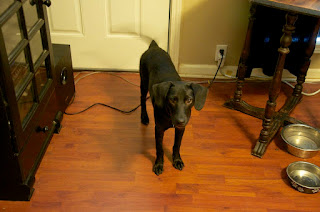 We think she appears to be fully grown, and I am happy she is going to be smaller than a regulation lab.  Perhaps there is even no lab in her ancestry, or at least nothing that has not been pretty well diluted.  She has not gotten any taller since we got her, though she has gained a bit more weight and I had to loosen her collar just a smidgen. 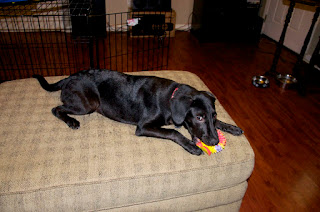 While she is bigger than your typical lap dog, she is small enough that she can lie on my lap, which she likes to do in the morning after she has been fed.  That is her favorite petting time before she is ready to settle down again for her morning nap. 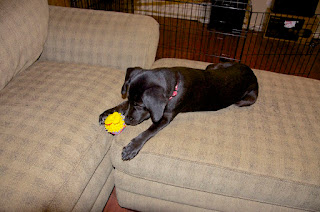 I won't say the change in routine has been without its challenges, although for the most part, useful and beneficial.  In addition to my arising earlier which has given me more hours of productivity, it also forces me to slow down and just "be"sometimes--an altogether useful experience as well.  This morning, I finished the second of my online continuing education courses on post traumatic stress disorder and working with veterans.  I don't do private practice therapy any more, but it has been useful information as far as my being an educator and preparing clinical social workers for practice.  I am deeply opposed to war as a method of intervention, but given that it will likely continue to be policy for the foreseeable future, and given the reality that we have done a very poor job of caring for the mental health needs of military women and men, I deemed it important to understand the mental health needs, trauma, and barriers to service for this population.  Our state National Association of Social Workers is participating in the effort to bring this training to Mississippi social workers, so I felt an obligation to participate as well.  The training was developed by some of the top experts in the field and is free right now, so those were also good reasons to take the time and make the effort.

And with that said, it's time to put the baby down for her nap and go find her some new toys.  I wonder if they make chew toys out of canvas?

Years ago our family had a "mini" black lab mix dog named Sniffles. She was a wonderful family dog and companion. Abby reminds me of her,love the pictures. And, oh yes my pack loves to "seek and destroy" their toys, too!

You made me chuckle. :) Abby and I had a great time out in the yard this evening, as it was the first cool day in a couple of weeks. She had played her heart out with her new toys, and then fell asleep in my lap. I did not get done all I needed to do, but perhaps, I did all I needed to do.