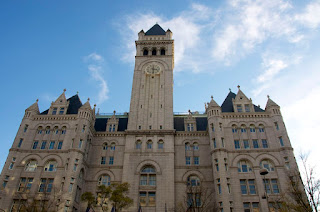 Endangered even prior to completion in 1899, the "Old Post Office" is once again facing an uncertain future, at least in the minds of some.  In 1891, Willoughby J. Edbrooke, supervising architect of the Treasury, was appointed to finalize the design for the new federal building (Scott G. Shultz, America's Watchtower: Saving the Old Post Office, 1998).  Five different supervising architects worked on the design during the seven years of construction, and made varying degrees of alteration to Edbrooke's plan.  All were influenced, however, by Henry Hobson Richardson, "considered one of the greatest architects in the history of American architecture" (Shultz).  Every characteristic of Richardsonian Romanesque style was included in the design.  Richardsonian Romanesque architecture was


...characterized by heavy, rough stone construction, round arches framing windows and doors that are cavernous in design, squat columns, towers..

The building was the first government building to have its own electric power plant, and included a 99x184 foot glass-covered atrium. 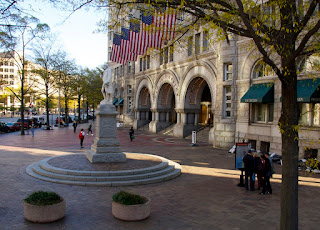 The Columbian Exposition in Chicago in 1893 introduced the neo-classical style, and the government quickly adopted the style for all new federal buildings, to produce uniformity and conformity (Shultz).  Plans for demolition of the new building began even prior to its completion.  Unfortunate as well, the new post office did not stimulate growth in the area, and in fewer than ten years, many began clamoring for the building to be torn down.  The absence of funds halted its razing during the Great Depression: there was simply no money to demolish it. 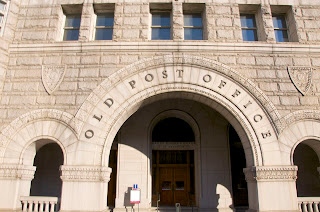 Plans for demolition were approved in the 1960s, and scheduled to begin in 1971.  Locals began picketing under the banner "Don't Tear It Down" and attracted the interest of Nancy Hanks, then chairperson for the National Endowment for the Arts (nps.gov; gsa.gov).  She testified before Congress, saying


..to encourage people to dream about their cities...to consider the alternatives before they tear them down...

She also advised that it would cost $60 million to demolish the building, and only $30-40 to renovate it, and the decision was made to preserve the building.  Preservation began in 1978, under the design of architect Arthur Cotton Moore, and was completed in 1983.  With Ms. Hanks' leadership, the local group formed the DC Preservation League.  Legislation was passed, also influenced by Ms. Hanks, to create federal/private partnerships to allow private businesses to occupy the same space as federal agencies.  The Old Post Office became home to the Endowment, the League, several federal agencies, and businesses aimed at tourists.  Operated by the Park Service, visitors can still access the clock tower and its panoramic views of the city, for free...for now. 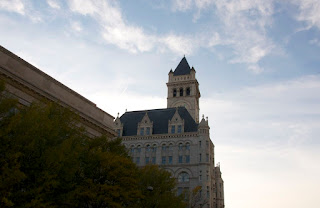 That's all the good news.  The building--on the National Register of Historic Places--loses about $6 million a year, and the federal government has decided to sell it (Jonathan O'Connell, Washington Post, 2012).  General Services Administration sought proposals to redevelop the site, and the winning bid was Donald Trump with a plan to turn the building into a luxury hotel (O'Connell).  As a nod to the building's history, Trump will include a "museum space" alongside the spa, restaurants, and luxury rooms.  How exactly will they preserve a building, whilst turning it into a luxury hotel?  That's what some other folks would like to know, too.

At completion, the New York Times described the new building as


...a cross between a cathedral and a cotton mill.  (Shultz)

Although the historic qualities of the building have become appreciated since then--for one, it was the last major example of Richardsonian Romanesque to be constructed in DC--there is still reason for concern.  I doubt anyone advocates continued operation of a project that loses six million dollars a year.  On the other hand, exactly how many more luxury hotels does the city need?  Currently, the building is open and available to the citizens and taxpayers who help to fund it, as well as home to businesses that pay rent.  Converted to a luxury hotel, it will be off-limits to most of us.  That does not seem like a good compromise for such a significant part of the history of our capital city.

While it still remains a national park, you can download the poster of the interior shown at the link above, and one of the exterior.  Better get it while it's still free, and before the Old Post Office sign is replaced with Trump.  Historic American Buildings Survey photographs are available at the link.
Posted by Suzassippi at 10:50 AM