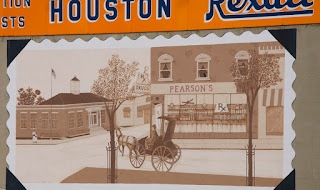 What's wrong with this picture?  It's a mural on the side of Pearson's Rexall Drug Store in Houston, Mississippi.  It depicts the front of the building, as the "driver" is approaching the corner, and the drug store sits across the street from the courthouse (not visible) and the post office.  Assuming the presence of the horse and buggy represents pre-automobile days, that would place the time of the town at least prior to 1927 or so when gasoline powered automobiles became more common.  The Houston post office depicted in the mural was built in 1939-40. 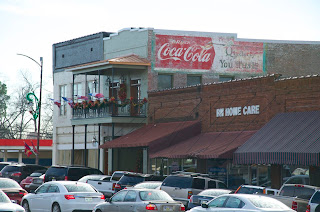 "Rush Hour" traffic in Houston was unbelievable.  I was parked in front of the post office, a block further up this street.  Traffic was literally bumper-to-bumper, and I sat there trying to back out for well over 10 minutes.  There was no let up in the traffic.  I finally just inched out a bit at a time and took a brief lull of 3 seconds between cars to begin my immersion into the traffic.  I don't think the person behind me was very happy that he had to stop, but I was pretty convinced by then that no one intended to enable me to move.  I, on the other hand, stopped to permit two vehicles attempting to back out to merge into the traffic.  I am a believer in traffic karma--give generously--it usually comes back.

Unfortunately, the Mississippi Department of Archives and History database, on which I heavily depend, does not identify many Houston buildings, and even fewer by address.  The Coca-Cola mural appears on the side of a building on the Courthouse square, which I would guess dates from the late 1800s.  Just be advised that if you plan on doing your holiday shopping in Houston, don't park on the square in front of the stores.  You'll be there for a while.
Posted by Suzassippi at 10:05 AM

I wish you had told me when you were coming to Houston, I would have been more than happy to have been available to give you a tour and show you the sights. Give you a run down on history, architecture, the works. MDAH has recently finished and approved a historic district nomination for downtown Houston. Even though I am now 50 miles away, I would still make an effort to give you the run down on everything. You should really get the full tour of the courthouse built in 1909. The same year the Carnegie library was built. Also I could take you to the sight of the old high school which sat on the grounds of the first Mississippi Normal College, it currently is home to the Lower Elementary School. Lots of history in this little small town. Even some national history too.