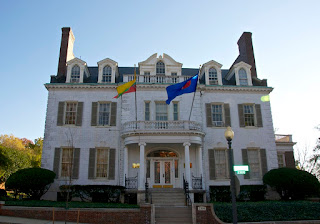 The sun is shining here for the first time in a couple of weeks, so I thought it high time to take advantage of the better weather and go revisit DC's Embassy Row.  Currently home to the Embassy of Myanmar, this house carries its own unique history.

It was designed in 1902 by Appleton P. Clark, Jr. for Thomas M. Gales, whose realty firm developed much of the Kalorama Heights area (Paul Kelsey Williams in Historical Research of LeBourget; presidential avenue.com).  Clark (1865-1955) was known as


...one of the most prominent architects practicing in Washington at the beginning of the 20th century. (David Maloney, 1994, in the nomination form for one of Clark's bank buildings)

His typical residential designs were in the Georgian Revival style, including

Herbert Hoover purchased the house and lived in it from 1921-1929, and again in 1933-1944.  The house was built in the grand style of the era when entertaining in large elegant rooms was the norm in Washington politics and society.  Hoover sold the 22 room mansion in 1944.

Myanmar established diplomatic relations with the United States in 1947, and a few years later, purchased the Gales house for use as an embassy.  Although the front has been painted white at some point, the sides of the house still reflect the original red brick.