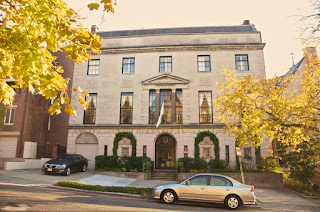 The Embassy of Cyprus is located in the Kalorama district of Washington, DC, along the "Embassy Row."  According to the official website of Cyprus (cyprusembassy.net), the island has an extensive history, some of which I knew about.  I recall Dr. Martin Sundel, my systems professor during my graduate work, talking about his work on social systems in Cyprus, and the long conflict between the Turkish Cypriots and the Greek Cypriots.  The conflict between Turkey and Greece on Cyprus dates back hundreds of years.  The island has been conquered at various times by the Assyrians, Egyptians, Persians, Romans, British, and Ottomans.  In 1878, the Turks ceded Cyprus to Britain.  British rule lasted until August, 1960, and after a 4-year liberation struggle, independence was achieved and Cyprus declared a republic. 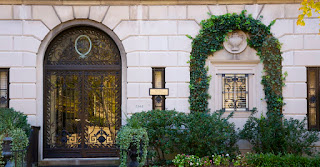 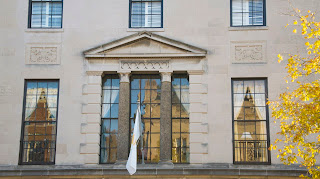 In 1963, the President proposed amendments to the constitution, the Turkish Cypriots rebelled, and the ministers withdrew from the cabinet and public servants discontinued work.  A July 15, 1974 military junta coup attempted to overthrow President Archbishop Makarios.  As a result, Turkey invaded and troops occupied 37% of the island. Over 40% of the Greek population was forced from the area, and many were missing.  The Turks continue to try to partition the island through military occupation and colonization.  UN intervention has been unsuccessful in resolving the issue.

Note: All information taken from cyprusembassy.net, the official Embassy of Cyprus website.
Posted by Suzassippi at 10:13 AM