I saw the President... 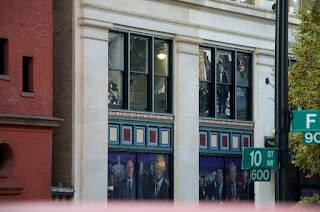 ...in Madame Tussauds window.  The former Woodward & Lothrop Department Store, known as the "Woodies Building," was built in 1887 in the Beaux-Arts style (Rachel Tepper, October 25, 2011, Huffington Post.)  The exterior was decorated with cast iron and leaded glass accents in 1902.  Photographs of the building details, following a new paint job, are available at the link. 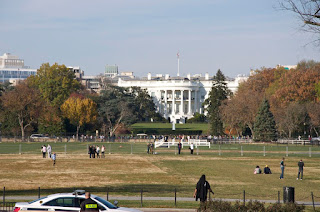 Although no one can get very close to the White House these days, I am pretty sure that I saw President Obama waving at me, so I just waved right on back at him. 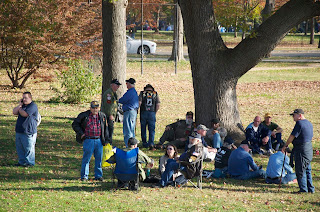 It was Veteran's Day, so there were a lot of veterans in the park across from the Mall, just hanging out in groups and talking. 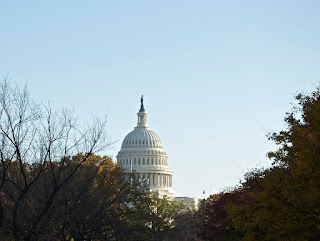 On the loop back around, we came sort of close to the Capitol.  I wish I would have had more time--I would have liked to have stopped in to see the folks from here that don't respond to my letters and see if I could have gotten a better response in person.  While they dutifully "answer" my letters, it is a canned response, that never, ever, responds to the question I have asked, or the position I ask them to support and to tell me if they will or will not support it, and why they will or will not.

My best representative story ever, though, is the morning back in Texas when I answered the phone and a woman said, "Can you hold for Congressman Stenholm?"  Yes, ma'am, I sure can.  The Congressman came on the line, and personally responded to every question I had written, and asked, "What is it you want me to do?"  At the end of our conversation, he invited me to call him and ask to speak with him personally in the future, should I have concerns about his representation.

To paraphrase Larry the Cable Guy, "I don't care who you are folks, that there was representation."
Posted by Suzassippi at 6:18 PM