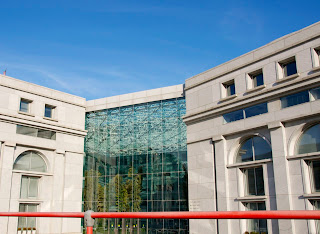 
...a shining beacon of modernism...that incorporates vast shining waterfalls of glass with a five-story atrium filled with trees...which is ...the biggest destroyer of migratory birds among the structures studied by City Wildlife. (Metcalfe, 2011, Bird impact kills in DC ranked by order of deadliest buildings)

Wow, that was really not what I was expecting to find when I looked up this building that I had noticed near Union Station while on my bus-top tour.  It seems that, although stunningly beautiful, the glass-fronted building (and others like it) when illuminated at night, attract migratory birds with deadly results.  For reasons that are not known, as the birds in a migratory path over the city spot them, they either fly into the glass walls, breaking their neck, or fly around the buildings until exhaustion sets in and they fall to the ground and die from impact or are killed by predators. 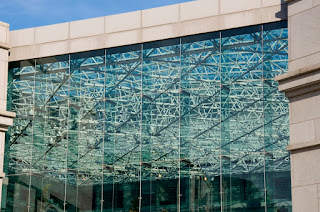 The City Wildlife project conducts studies of the buildings killing the most birds and makes efforts during migratory seasons to get the management to voluntarily reduce the lighting at night.
Posted by Suzassippi at 1:24 PM