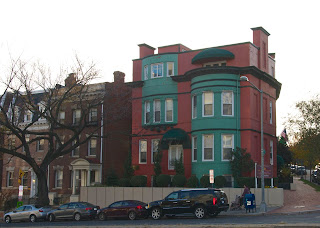 The King William houses 14 flats in the Kalorama Triangle neighborhood.  A 1-bedroom rents for $3250 per month for 700 square feet.  The more economical studio is only $2200. 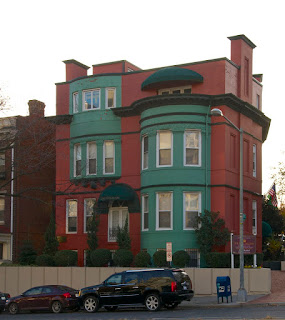 The Kalorama Triangle was originally part of the 19th century Kalorama Estate.  Kalorama is Greek for "fine view."  The terrain was hilly, and rural until development began in the late 1800s.  Primary development occurred between 1897-1931, and the addition of the streetcar line down Connecticut Avenue helped fuel the growth of the area (Kalorama Triangle Historic District brochure, planning.dc.gov). 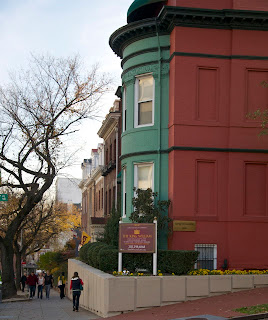 The early buildings were mostly in the popular Romanesque style.  A period of downturn halted building in the area, and when it resumed, other architectural styles were more popular and the neighborhood introduced the Georgian and Federal influences. 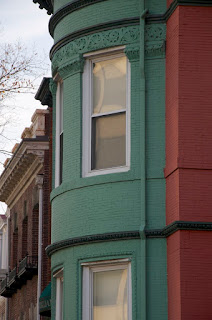 Although the area was restructured to remove some of the hilliness, much of the original terrain remains, and we did extensive walking up and down hills on the curving and winding streets.  I think DC has replaced New York City as my favorite city now, for the beautiful ambience of the neighborhoods and more relaxed sense.  But, rather like Atlanta, while I would have relished living here in my younger days, it was a tough trip for me physically.  Most of my photographs are from the top of the bus!
Posted by Suzassippi at 10:34 AM

I rather like them but certainly not the pricee! When were you in D.C.? I always thought Georgetown was pricey but guess all of D.C. is.

On another note, I can see you and Randy going on a Repositioning Cruise like Jane & Rich. Pick your spot. I checked the website & cost is small.

I see my typo. Please excuse!

Ha, it was probably the reaction to the cost: priicceeeeee. I was up there last week for the Council on Social Work Education meeting--presented on my work in Mound Bayou.

We are definitely doing the Alaska cruise this summer. We'll see how that goes. I don't know if I would want to be at sea for 20 days, but I would love to go to Australia!

According to the website, they're not all that long. But, I suppose the ones to Australia would be.

On another note, what do you think about the gov't dredging on the Mississippi? Saw an article in the paper today. It would surely mess up the economy in the area.