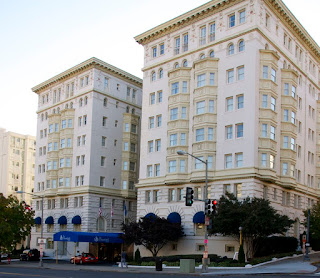 The Churchill Hotel opened its doors in 1906 as the "Highlands" on Connecticut Avenue.  It was designed by architect Arthur B. Heaton and was originally an apartment house serving diplomats and legislators.  Construction began in 1902, and at that time, the view of the Potomac River was visible from the site.  At a cost of $200,000, it was one of the most expensive apartment houses in the city.  The Beaux Arts building was the first and only apartment in DC to provide a basement level garage until the late 1920s. 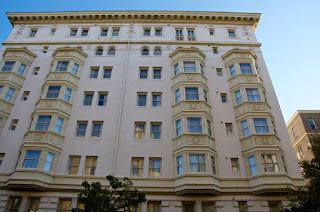 The facade was designed with a "heavy rusticated two-story base, while a series of fourteen oriel windows ranged between the third and sixth floors." 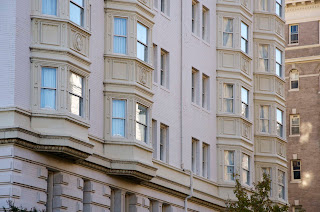 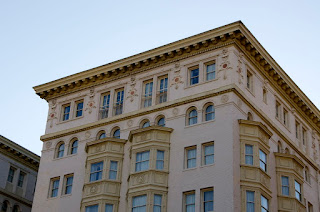 The Churchill is located in the Kalorama Heights section of DC, Greek for "beautiful view."  The neighborhood has been home to Presidents Taft, Harding, Hoover, Roosevelt, and Wilson.  Other noted residents have been Ted Kennedy, Hillary Clinton, Donald Rumsfeld, and Robert McNamara.

We selected the hotel for its historic qualities, as well as the beautiful neighborhood.  Next post, I'll give you the scoop on the lack of AC, open windows in DC smog, and cranky room service staff, all of which have combined to make this a memorable trip.  In the words of our room service waiter tonight (which commands a 22% automatic gratuity) after we had to call down and ask for silverware and when she brought them back up, smirked enjoy!
Posted by Suzassippi at 9:27 PM