The Pontotoc County Electric Power Association was incorporated in 1934 as the second oldest rural electric co-op in the United States (www.pepa.com/land).  Alcorn County in Corinth was first, and Prentiss County in Booneville was third.  In 1936, service was extended to Calhoun County and the name was changed to Pontotoc Electric Power Association. 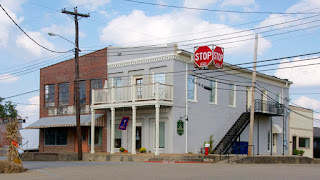 Operations began at #26/28 Liberty, the gray building in the photo above.  The brick building to the left is #24 Liberty.  The two spaces


...appear to have been built as a single building around the turn of the century...(Sanders & Cawthon, 1993).

Of the building, Sanders and Cawthon revealed that the two-story, half-gable front saw a number of changes since the original estimated date of construction.  The old power building in 1993 was described as


...second floor is divided into three bays by pilasters. These pilasters support a brick denticulated cornice. Set into the reveals formed by the pilasters are three ten-light, metal frame, casement windows.  The first floor storefront was extensively reworked about 1960. The storefront slants back from the sidewalk. The storefront is composed of a yellow brick bulkhead with plate glass windows and a single-leaf glazed aluminum door. To the right of the storefront and parallel to the sidewalk is a six-panel metal door that opens into the stairway leading to the second floor. A brick column at the corner of the building supports the second floor.

The Pontotoc Electric Power Association history indicates the building was remodeled in 2005 as a law office.  The website includes several vintage photographs of the before and after remodeling of the Pontotoc Wholesale Building, where the Association moved in 1950, and the latest remodel of 1988.  Neither of the remodels was an improvement over the original building in my mind.

The building on the left, #24 Liberty, still retains its metal frame casement windows on the second floor, but the building was "extensively remodeled around 1945" (Sanders & Cawthon, 1993). The changes included the addition of plate glass windows on the first floor and the aluminum awning.  The photo below shows letters that appear to have been painted at two different times, based on the oddly placed location.  "FEED" and "FARMER" appear on the lower left of the sign, and what appears to possibly be "PONTOTOC" and "CO" are the only letters I can make out on the top row. 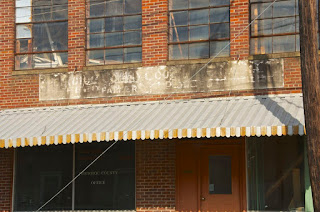 The building is currently in use as a county office.
Posted by Suzassippi at 3:43 PM

Interesting website-not only about the buildings but also the parts about the ice storms, tornados and Katrina.

How interesting! I should let you loose in my neck of the woods & let you discover all. :-) About 2 years ago, Maggie & I heard a lecture on all the old movie houses & what followed after they closed. As you can imagine, some are offices, new car dealerships, etc. On some of the buildings, you can still see the old marques.