Do you have confidence in your flour? 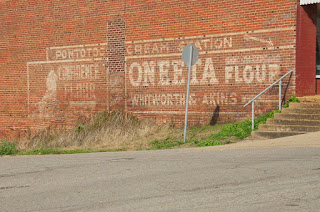 Update: See update note at end of post!
According to WTVA-Tupelo, last summer work was to begin on the restoration of this 1920s-1930s advertising mural. Apparently, "soon" did not mean within the next 4 months, as that has been how long the mural has been waiting since the big news announcement. Oneeta flour was listed in the 1906  Official Gazette of the United States Patent Office, although I can find no other references to it. Note the shape to the left of Confidence Flour? That is supposed to be a lion. Whitworth and Akins, according to WTVA, were a local grocery store. 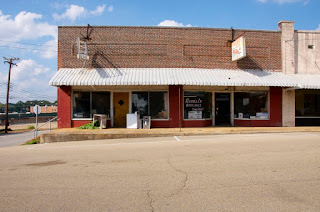 Here, the story gets a bit cloudy, in trying to determine which building is which.  The mural is dated to the 1920s-30s by WTVA's story.  The MDAH/Historic Resources Inventory lists 3 buildings on Marion street, 12, which is the white building housing a law office, no date listed.  14 is Russell's, credited to circa 1898, the building with the mural on it.  And there is a 16, dated circa 1950.  Clearly, 14 and 16, which appear to be the same building, cannot be these two separate businesses and one of them 1898 and one 1950 in terms of construction. 18 Marion is the antique store building, to the left of the above building. What am I missing?  Note: MDAH/HRI identifies the antique store building (not visible in this photograph) as built by 1898.  The picture gets even cloudier now! 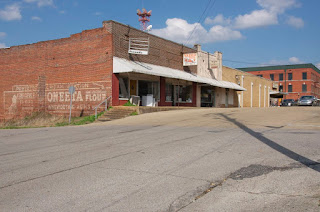 The Whitworth and Akins families were joined by marriage in the 1920s, so I can speculate that the children's parents were the ones who had the grocery store.  If anyone out there can shed more light on the building, leave a comment, please.
Another follow up note: The mystery (one of them, at least) is solved.  The database does not identify if it is West Marion, or East Marion, but additional sleuthing reveals that the buildings referenced in the database for MDAH/HRI are on East Marion, thus, not applicable to this row of buildings.  See the next post for information about what is really at 16 East Marion!
Posted by Suzassippi at 10:34 AM