On the Square at Pontotoc 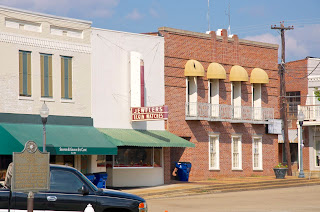 Last week, I ventured into some speculation about buildings on West Marion--and was totally off the grid.  Number 16 East Marion is the jewelry store in the center of the photograph above.  It took several wrong turns, and U-turns to uncover this story, but once I get started, I am like a dog with a bone.  Now, that can be a good trait to possess in some areas, but frankly, it can also take a lot of time.  But, there is enough misinformation floating around out in cyberspace, and repetition of misinformation quoted as truth ad nauseam.  I certainly don't want to add that to my list of incompetencies--no one should have more than two things on that list. :-J 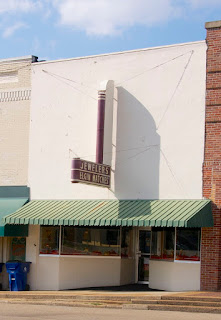 The Mississippi Department of Archives and History database lists the building as circa 1950, no other information.  However, Sanders & Cawthon (1993) reported in the nomination form for the National Register listing of the historic district that Sanborn Fire Insurance maps identifies the building as pre-dating 1898.  They describe the building as a brick, with stucco on the second floor, circa 1950s storefront, and add, 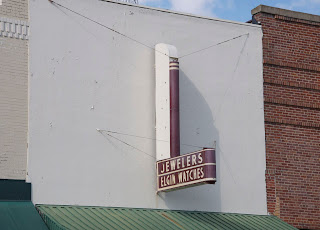 The Art Deco sign, which Sanders and Cawthon describe as neon, would be consistent with a 1950s remodel.  I love a good sign, no matter what style, but I am particularly enamored of those from the 40s and 50s.  They just seem so much more elegant and appealing--quite a contrast from the ubiquitous portable signs with giant yellow arrows and flashing light bulbs parked in front of every building on the strip.
Posted by Suzassippi at 10:20 AM