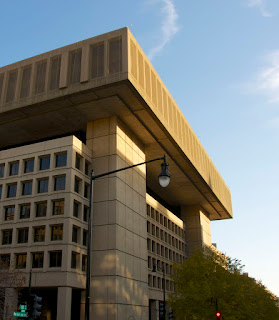 Sometimes I just get so excited when I figure out something--like spotting this building and thinking it was brutalist...and then confirming it later.  As the bus rolled by, I was just drawn to the structure, almost mesmerized by this big ol' box of a building.  Exactly what the General Services Administration asked for in 1963 for the new headquarters of the Federal Bureau of Investigation, designed by Charles F. Murphy and Associates of Chicago:


...traditional box-like structure...incorporated the Bureau's request for a central core of files surrounded by offices. 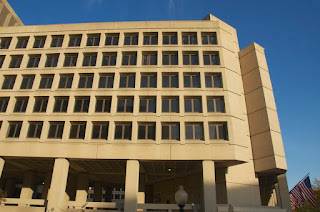 Recessed panels along the ground floor were spaced to give the illusion of two-story columns, with an "arcade-like facade" (FBI.gov, on the building's history).  Construction took 7 years.  Thirty-eight years after the first proposal for a separate FBI building was completed, 15 years after Congress approved construction, the last of the employees moved into the building--three years after it was completed.  The wheels of bureaucracy do turn slowly. 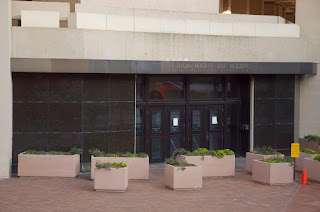 President Richard Nixon signed PL 92-520 designating the J Edgar Hoover Building just two days after Hoover's death.  The Washington Post reported in November 2011 that the FBI was "bursting at the seams" and "urgently needs...new headquarters" (O'Keefe).  The building was described as "aging" and "deteriorating" and "in need of serious repairs."  This "aging" hulk is 38 if you don't count the 7 years spent building the thing, just a baby amidst all the really old buildings in DC--like, say the Capitol for instance.  How does a concrete block deteriorate?  Was the concrete just not that well put together in the first place?  It is concrete and steel for crying out loud...not that I would question the judgment of the FBI if they say the building is deteriorating, but serious repairs?

The dcist reported that it could take up to 14 years to renovate, but the building could be demolished and rebuilt in about 7 years.  No wonder we can't get anything done.
Posted by Suzassippi at 10:29 AM