First, there was one cat... 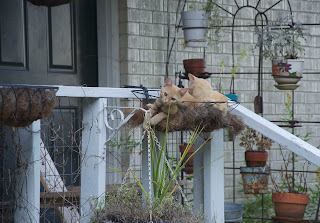 It's time to take a break from historic downtown New Albany and venture a little closer to home.  This basket was one of Felix's favorite napping places, too.  I cleaned out the long-gone forget-me-nots recently, and two of the kittens thanked me for it. 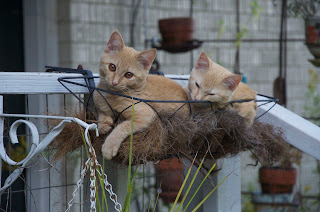 The saga began back in 2010 while I was in South Africa.  Randy discovered the ghost kitty on the screened porch.  Ghost Kitty was the auntie of Bobbette and Bobbie.  She took up residence on the screened porch during the winter by climbing over the top of the doggie gate that opened onto the front porch.  Being ever the sucker for animals that showed up at my doorstep, I began to feed Ghost Kitty. 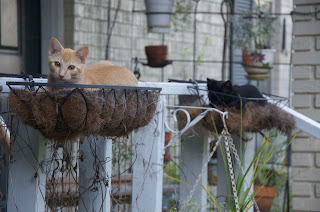 Not long after, her twin sister Mamacat began dining at the supper dish as well.  Mamacat and Ghost Kitty were both calicos and the only difference was their tails: Mamacat was a bob-tail.  Having feral cats in the yard taught me the understanding of why someone originated the saying "the morals of an alley cat."  Mamacat and her boy, Oscar, are the parents of the 3 yellow and 2 black kittens that I discovered on the front porch right after rescuing Felix's kittens (also fathered by Oscar) from the side of the road. 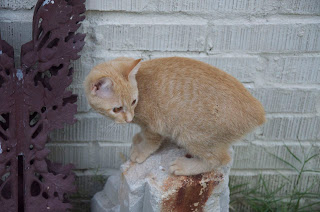 The kittens are no longer afraid of me, and run up the steps each morning as I go outside with the cat food.  They will nose my hand and occasionally allow me to pet them briefly.  They love playing with the cat toy I dangle for them, and will pounce on my toes sometimes. 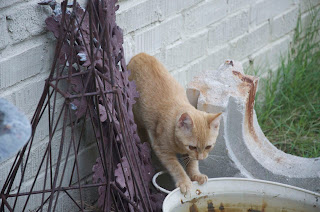 Of course, the problem with all of this delightful fun is before long, there will be 4 more adult females and another adult male who will morph from these playful little darlings into their natural state of "let's get together and make some more cats" stage of development.  There is a "trap and release" program that operates to spay and neuter feral cats, which is a much better alternative than another generation living in my front yard.  Unfortunately, Mamacat is way too savvy to fall for it--not to mention she is downright hostile to me.  I've had to explain to her often that she has to play nice to stay here, but she generally does as she pleases--rather like the humans who live inside the house with me.
Posted by Suzassippi at 10:47 AM