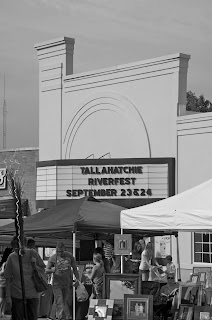 The Magnolia Theatre was constructed in 1947.  Prior to then, there were two other theatres in the community: the Ritz, and the Royal, both built before 1941.  One source also indicates an African American theatre, the Magonia, operated from 1950-60, but I can find no other information to corroborate that. 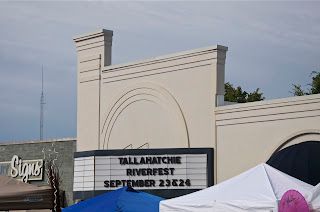 At some point, the Magnolia was renamed the Cine.  A photo from 1986 shows a different facade for the building.  It appears to be a dark (painted?) brick on the taller column.  The center is white, with a frieze.  The theatre was renovated and received a "facelift" not long ago to become the Magnolia Civic Center.  The adjoining building is the conference center. 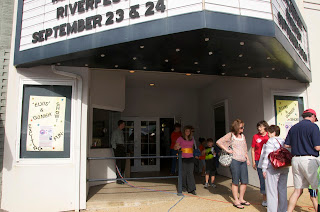 Inside the theatre was underwhelming.  The only thing of real interest to me was the quasi-1950s design on the curtain from the lobby to the stairway to the balcony.  A glimpse into the theatre revealed nothing that remotely resembled the time of the original building.  It looks every bit the modern Civic Center, and nothing like a vintage theatre--or at least nothing like the wonderful restored theatres like the Paramount in Abilene, or the National in Graham.
Posted by Suzassippi at 11:26 AM