The Fed, the Grand, and Gone with the Wind 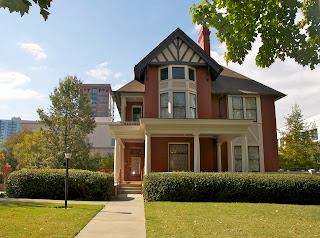 I stumbled across the Margaret Mitchell House while taking my walk around the block after brunch yesterday.  The house was built as a single residence in 1899 in the Tudor Revival style.  It was converted into apartments in 1919, and Margaret Mitchell wrote Gone With the Wind here. 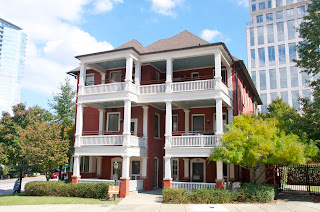 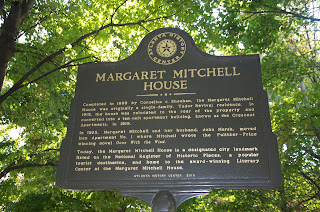 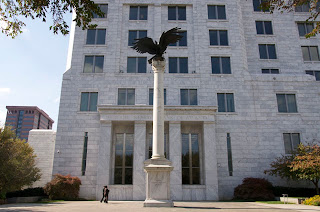 I was planning to head on back to the Marta stop, but spotted a sign across the street advising of the Fed, so thought one more block would not be that far out of my way.  They have a museum in the Federal Reserve Bank of Atlanta, but I figured it would involve security lines, etc, and I was not in the mood to relinquish my cane and camera for whatever might be in a bank museum. 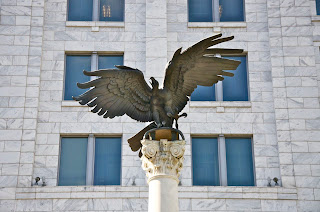 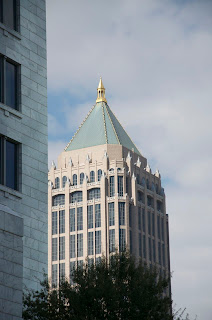 This building is One Atlanta Center, a 50 story skyscraper completed in 1987 by architects Philip Johnson and John Burgee.  It was the tallest building in Atlanta until 1992, and now remains the 3rd tallest at 820 feet.  It is made from Spanish pink granite, with a copper pyramidal top and a gold peak, and has "gothic flourishes." 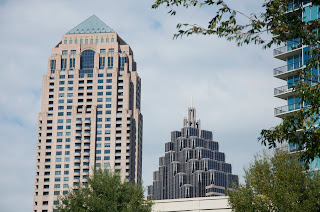 It's neighbor, the Art Deco-inspired GLG Grand building is the 9th tallest building in Atlanta, and was finished in 1992 by Swedish developer G. Lars Gullstedt.  It opened to a depressed market that led to Gullstedt's eventual bankruptcy.  Known first as the GLG Grand, then the Occidental Grand, and now home to the Four Seasons Hotel, Atlanta, it was the first mixed-use skyscraper in Atlanta.  The bottom portion is the hotel, and offices and condominiums are on the upper floors.  Architect was Rabun Hogan Ota Rasche firm.

As I made my way back up to Peachtree, I thought (mistakenly, I might add) that I had walked far enough out of my way that it would be just as close to return to the hotel as to return to the Marta stop.  Not the case, and Peachtree is an up-and-down section in Midtown.  It's been an Advil day today.
Posted by Suzassippi at 8:56 PM