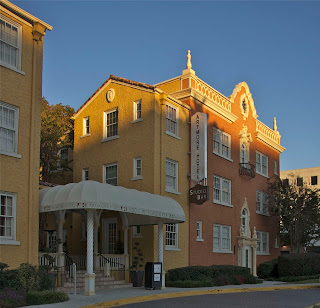 The Artmore Hotel building was first opened in 1924 as an apartment residence, built in the Spanish Mediterranean style.  Some time in the mid 80s, it was converted to a hotel.  I first discovered it in 2003 (when it was the Granada Suites), ironically, when I went to Atlanta for the CSWE conference (which is why I was in Atlanta this past week) and interviewed for the job with the University of Mississippi.  Ironically also, the conference then was in the Marriott Marquis as it was this time.  I was explaining to my colleagues today how Jane/Gigi and I used to seek out smaller, unique hotels when we traveled, and would generally find them on Travelocity or Cityscape.  I primarily selected this hotel based on its looks (I have always been drawn to unique architecture), and the fact that it was across the street from the Marta and I could easily get to the conference hotel. 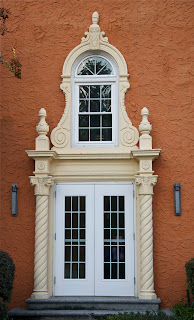 I have been unable to locate any other information about the building itself, though it is just slightly north of the Midtown Historic District.  In 2009, the building was purchased and renovated, and thank goodness, they left the original exterior.  The interior is very reminiscent to me of the golden Hollywood days (which would have begun in the 20s and lasted through the 50s) with its elegance.  White leather, white linens, with touches of black and red, black and white photographs, marble tile, and crystal doorknobs and woodwork that appears to be original to the building (or at least here for a very long time) give it a simple and clean elegance.  While distinctly different from the Spanish Mediterranean exterior, the interior compliments the exterior with a sense of Morocco meets modern glamour.  One almost expects Humphrey Bogart to wander down the hall and take a seat at the curving bar with its metal, glass, and stone elements. 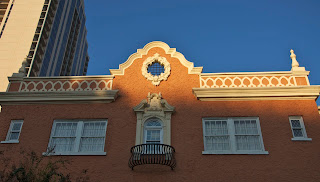 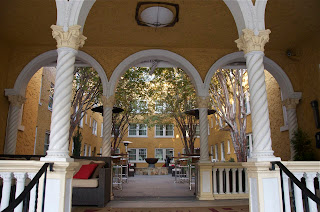 At night, the firepit in the center of the courtyard is lit, and when it is cool, they use the kerosene outdoor heaters.  It reminds me of Moyo in South Africa, which also evokes very positive and warm feelings in me.  When we arrived Wednesday evening, the teaching artists from the Atlanta Music Project for Social Change were playing in the courtyard, and the Artmore frequently hosts music events.  As John Lee Hooker says, "this is hip, pretty baby, this is hip."

For the first 4 posts on Atlanta and why I love the Artmore, click here, here, here, and here.

Posted by Suzassippi at 8:15 PM

They have changed the lobby slightly, but other than that, it is still the same. Good thing they have all those young people working the desk; I think those lights might give me a headache.

Enjoyed your pictures--thanks for the link!