Note: I left my glasses in the vehicle tonight, and once I discovered it, I was not in the mindset to dress and trudge down that hill to get them (and you will discover why shortly), so if you see lots of typos, forgive me and I will correct them once I can see more than a big old blur. :)
Okay, it was just flat too cold to go out taking pictures today, not to mention, after walking up and down hills so much to/from the Marta, I am making Dr. Gregory House look like a sprint runner in a relay race.    And, did I mention walking downhill to the parking garage in the rain last night after my truck was broken into, to verify what or if anything had been stolen?  And then walking back uphill...with a 20 something young man who--though just as nice as he could be holding the umbrella, and so apologetic for making me get out of bed and dress to go check it out while the police were called, did not seem to grasp that me and my walking stick (I think the African term sounds better than cane, so I am adopting it along with all the other African terms I prefer) could not scale that hill quite as easily as he could.
I had another 8 a.m. meeting this morning, related to my gerontology curriculum grant, but it was worth the early morning rising.  It was really great to hear from the other 9 faculty members (there are only 10 grants that were awarded in the US, and I was one of them), and to be able to share our accomplishments and recommendations with others. 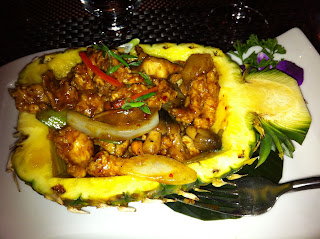 Debra and I decided we were in the mood for Asian cuisine tonight, so I did a little leg work via the Internet (isn't it great you can just type in "asian food atlanta midtown" and voila! find out where to eat?). Although my first pick would have been the Vietnamese place where the chef had been here since 1987 when she came over from Vietnam and opened her restaurant, unfortunately, it was temporarily closed due to her illness.  Next up on the list was Tamarind Seed, and I recalled having passed it when I was taking my walk around the block Thursday.  We decided we had walked enough for this week, and two blocks in the cold wind from the Marta station one stop up was not appealing, so I had them bring the truck up and we drove over.  When you have one-way streets (West Peachtree where we are is one way north, and Peachtree where we needed to go is one way south) it can mean you have to go a tad out of your way at times.  Add to that construction, and we ended up on Peachtree Circle (yes, at this point, Debra said there were way too many Peachtree somethings in this town) and I was winging it and hoping I could find my way.  We drove through some beautiful homes in the area though, and agreed when we win the lotto tonight that we will buy one in case we need to travel to Atlanta again sometime, or just want a nice weekend away.

As I often do, I had intuited correctly and we made it to Peachtree right by the Tamarind Seed.  We pulled into the parking garage and the lower floor was valet parking, but as we kept going, I saw a handicapped spot--and it appeared to not be in the valet section--though why one needs handicapped parking in valet is sort of a mystery to me.  We pulled in, I hung my tag, and as I was getting my walking stick (see, it is a habit already) out of the truck, a young man pulled into the handicapped space next to us with a non-handicap tag and kept looking at us.  Debra said, "Is it okay for us to park in this handicapped spot?"  The young man proceeds to explain--with a strong accent--that yes, it is, since I am handicapped, but it is really valet parking.  I said fine, just tell me where the handicapped parking was, and I did not see that this space was valet parking.  He assured us it would be okay since I was handicapped, and though I was ready to get back in the truck and move, Debra was saying, "he says it is okay."  I was just worried my truck might not be there when I came out of the restaurant because I was clearly taking the space for a valet-parked handicapped vehicle, even though it was driven by an able-bodied person at the time.  I have to tell you, I am just not adjusting well to these rules--seems to me that valet or not, if it says handicapped parking only with a big ole blue square and wheelchair symbol, and it is closest, it ought not be co-opted by the folks who earn money for parking the car for you, but maybe that is just me. 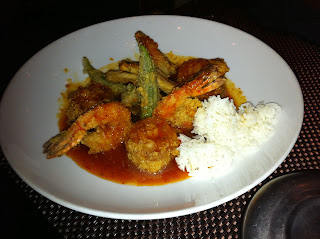 We parked and to make it easier to find the ticket on the way out, I stuck it in the visor.  I have way too many tickets, entry cards, etc in my wallet now.  We got to the restaurant 3 escalators up, and see a big old sign: free parking with validation from the restaurant.  Neither of us was willing to walk back down, so I paid $9 for parking in a place in order to eat dinner.

In spite of all the folks in their Halloween costumes (what is the thing with adults dressing up in costumes and going out to eat?) we enjoyed our food, and its deliciously beautiful presentation.  It was difficult to decide, but finally we settled on a spring roll appetizer, which was indeed wonderful, and I had Siam chicken while Debra had shrimp and scallops with okra and eggplant.  I was mainly intrigued by my food being served in half of a pineapple, but it was truly delicious.  I said I wished it had less chicken and more pineapple, which Debra found oddly amusing.  While I could easily live on bread, cheese, and vegetables, Debra needs her meat.  One thing we both agreed on, living in the city is for young folks and we need to be back on our Taylor hill sides with our dogs.
Posted by Suzassippi at 10:06 PM