I was on the road before 8 a.m. this morning, going back to Mound Bayou.  I had a follow up meeting with the Mayor about our January Wintersession class in Mound Bayou, and some updating on where we are in terms of other service learning projects.  It was winter in Mississippi this morning, with overcast skies, drizzle, downright rain, and temperatures ranging in the mid 50s, lower 60s.  I had on a sweater and socks for the first time this year, and though it was gorgeous with the sun roof open initially, I finally had to close it and turn on some heat--even before it rained.
But for now, back to the work produced by the students in Saturday's workshop: 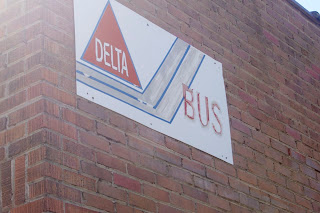 A building on the corner served as the bus station for years.  It is currently a restaurant/bar.  I could imagine a time when patrons sat on the bench outside, waiting for the bus that would take them up to Memphis, or Chicago.  It would stop in every little town along the way for passengers to disembark or board. 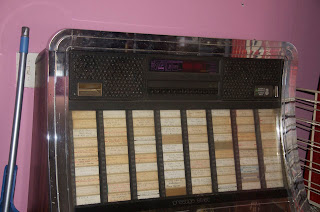 What is a juke joint (or jook joint) without a juke box? 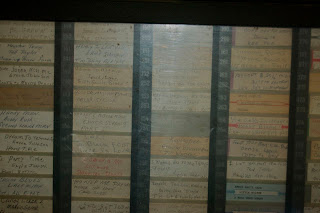 How many of these names do you recognize? 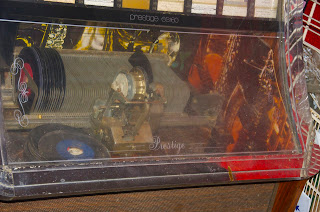 Wasn't it amazing when we put a nickel (or dime!) in the juke box, and watched that arm travel across to pick out our record?  Who remembers when they put those miniature juke boxes on each table so you did not have to get up to go select your songs?  Raise your hand now! 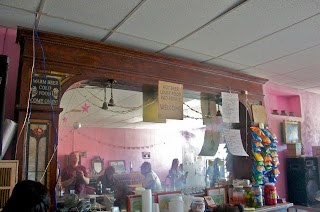 The story we were told is that this bar and mirror were part of a soda fountain originally, but that is not clearly evident in this picture. 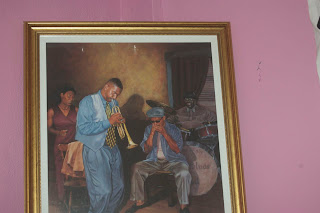 Are these walls Baker Miller Pink?  I have a Sweet Home Chicago Blues poster similar to this, from one of mine and Gigi's Chicago trips.  If I recall, that was when Gigi and I discovered that just because we are pronoid, does not mean everyone else is.  We had always been warmly welcomed in the neighborhood joints we chose to patronize in New York City.  We opt for a neighborhood Irish bar in Chicago and while they did not say "leave" the fact that we could not get served, or a place to sit, convinced us we should just move on.  We moved on the the Sweet Home Chicago Blues store, and then moved on waaaaaaayyyyyy back to our hotel. 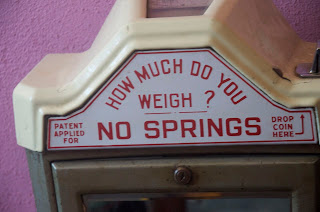 Okay, raise your hand again--who remembers when this was a penny scale? 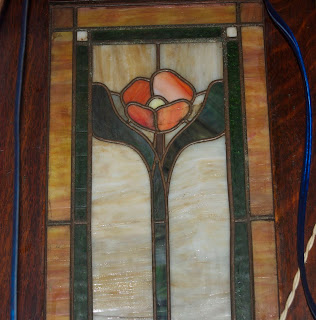 Stained glass in the mirror behind the bar. 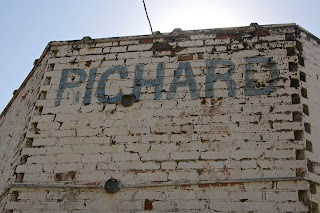 On the next block, watch for this brick design again.
Posted by Suzassippi at 6:54 PM

Have been enjoying catching up on your blog this evening. I do remember all the things in this post, but they are definitely memories from long ago.

Love the idea of giving someone else the camera and seeing what they view as picture worthy. A couple of weeks ago I considered giving my camcorder for a few minutes to a 4-5 year old while at the Midtown Debris Organization event. The opportunity never came up, but it sure would have been interesting to see what he would have filmed and how he sees the world from his height. Take care,

Thanks, Frank. I have enjoyed seeing what they see as important, given that they have lived there all their lives.