The Burden of the Deep Thinking 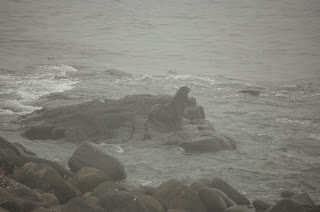 When I spent 5 weeks on the St. Paul Island, in the Bering Sea off the coast of Alaska, I had one of the most powerful experiences in my life.  It's not just "off the coast" of Alaska--it is way off the coast, like you cannot see Russia from there OR Alaska.  I did a lot of deep thinking during my time there--thinking about to what am I committed, to whom do I answer, how much am I willing to endure for the sake of things I believe to be the right things to do.  This is not a retrospective journey about St. Paul, though something I learned there came to me tonight.

Somewhere in the neighborhood of a year ago, the BTC Old Fashioned Grocery Store opened in Water Valley--a mere 20-25 minutes from where I live.  I drove down one day, aiming to feed my nostalgia for Bailey's Grocery and Market in Newcastle, Texas, where we bought groceries as long as I can remember.  Even after we moved to Graham, 13 miles away, we drove over to Newcastle once a week to buy groceries.  It was common to "sign the ticket" and then on payday, pay up for whatever purchases one had accumulated over the course of the week/month between paydays.  As a child and then an adolescent, I never thought about that from the perspective of the Bailey family.  The store was the support of the Baileys, their son and his wife and children.

I wheeled my cart around in BTC (which I understand is for "Be the Change", from Gandhi's "be the change you want to see in the world") and bought vegetables from local growers, organic eggs from local raisers, and stone ground grits from the Delta.  I "planned" to continue going there, and did make one trip back for more vegetables.  I looked at the milk--from the highly renowned local Brown's Dairy, but they did not have any fat-free and these days, I just can't do even 2%.  Somehow, the effort of driving a mere 25 minutes never happened.

I was excited to see that they started a delivery service to Oxford, and I could pre-order for a flat rate fresh produce, dairy and eggs, and other packages.  I "planned" to do that...and then thought, "well, what if I am tied up at work and can't pick up my delivery at the day/time designated?"  My mother had lots of old family sayings, and one of them was "The road to hell is paved with good intentions."

I believe in entrepreneurship, and that small businesses are important--vastly more important than being able to buy the cheapest product imported from some other country.  (I am not being nationalistic here by any means--I just think it is asinine that Mississippi imports "catfish" which is not even catfish, but something called basa, when our catfish farmers are going belly up.)  It seems bizarre to me that when I go to Kroger, my blueberries come from Michigan or Minnesota when Pontotoc Farms in the next county grows blueberries.

Not only that, I am sick to death of the toll that corporations have taken on this country and its working class and poor people.  While they continue to rake in unprecedented profits, people all over the nation are losing homes, jobs, have no access to health care or education--and NOT because they are not working.

So as I was reading the post tonight--the first in many months--of the BTC OFG, I found myself dealing with the burden of the deep thinking.  Out on St. Paul, which is an Aleut community, I remembered one of the community women talking with me about her role in the community, and explaining the burden of the deep thinking.  In Native American peoples--I think it is Chickasaw--it is sometimes called "the sickness of the long thinking."  With awareness comes a heavy burden: I know I need to act.  If it is important that this business survive--and I think it is--and it is important what it contributes to the health and well-being of not only their community--and I think it is--but to the greater good of Mississippi as a whole, what am I willing to do about it?  And that is the burden of the deep thinking.
Posted by Suzassippi at 8:06 PM