Updated: How many college seniors does it take to help a 3rd grader with math? 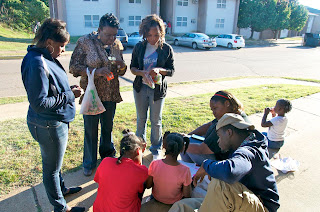 Monday marked our first return to Riverside for the semester.  We had 15 children for most of the time, and 5 or 6 more showed up near the end of our time there.  It was a beautiful day outside, which was fortunate, because the police officers had their annual haunted house set up in the community room so we could not use it.  This group of students had planned 3 activities, and they were all easily adapted to outside. 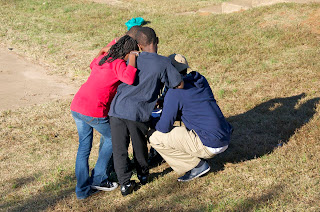 This might be my favorite photo from the day: Does not this just say it all? 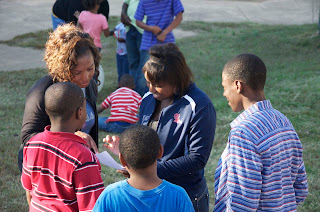 The students split up into teams for some critical thinking exercises.  The little boy in the blue shirt used to come to the program with his older cousins when he was still in diapers.  I had not seen him in a while, so it was great fun to see how much he has grown and listen to him tell us about his school. 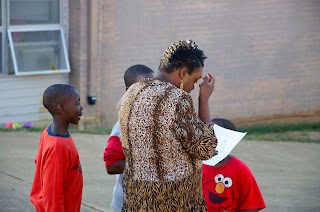 Along with the "regulars" we had several new children, and as always, they just fit right in like they have always known us.  That is one of the things that is so amazing about going to Riverside: Even though it is a different group of students each semester, we have affiliation with them because we have been going for so long--5 years now, several times every semester.  It was gratifying yesterday when they all got off the school bus that they would run up to me and hug me, ask what were we going to do today, or ask if we were going to help with home work.  There are two brothers who have been coming for years, and the older one shouted to his brother, "Hey, look who is here!" and pointed to me. 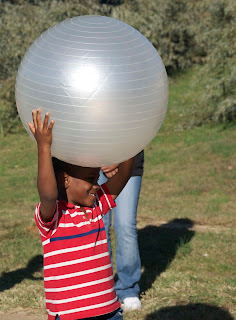 The students planned an engagement phase: Introductions of themselves and the students, using a physical activity.  What knowledge and skills can you identify in the activity?  I will fill in the gaps, but only after some "critical thinking" by all!  They also played a communication game, and several sessions of the critical thinking exercises.
Near the end of the activities, a little boy had come outside of his apartment and was standing across the street.  I asked him if he wanted to join us, but he shook his head no, so I said okay.  In a few minutes, he crossed the street and stood on the sidewalk.  I asked if he would like to come watch, and he nodded yes.  I asked if he would like a snack or a juice, but he shook his head no again on that one.  I recognized him from last spring when he participated a few times, so I was not sure where his reluctance was coming from, but I respected it and did not further attempt to engage him.  A few other boys came up and I offered snacks and drinks, and the little boy ventured over.  I offered snacks and drinks again, and this time, he accepted one.  He kept his distance from the others, standing a few feet away, and quietly watching.
After clean-up--which was minimal as the children had placed their empty drink cartons and snack bags in the trash sack--there was a little homework time on the front steps, and the answer is 5 social work students are required to answer a math question.  We even needed the iPhone to look up a few terms and a chart--math has changed a lot!  It is a few minutes out of our lives--and I know it is an additional stressor for the students--but it matters that we are there time after time.
Posted by Suzassippi at 7:37 AM