At least it is Friday now 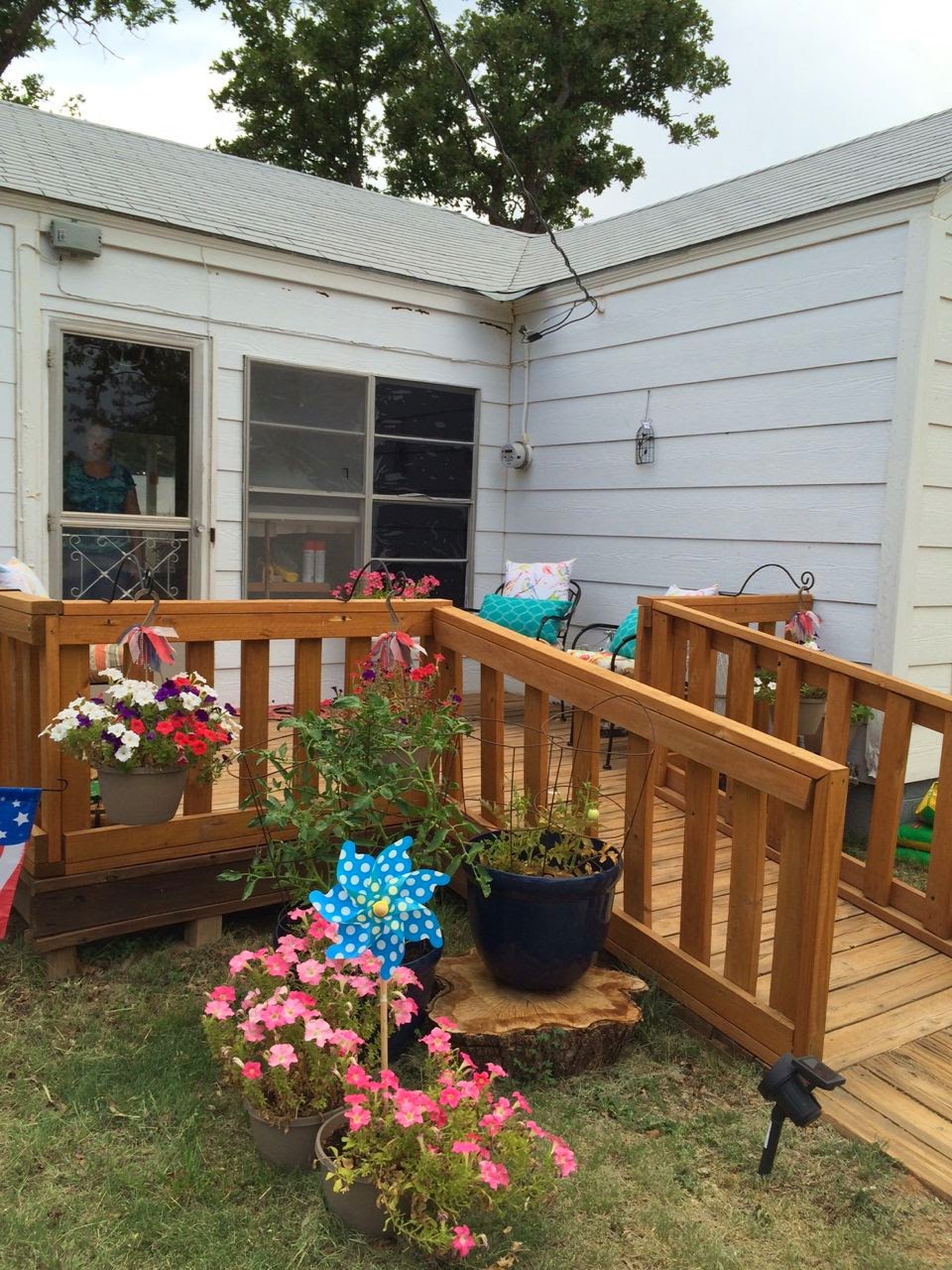 I made it back to Mississippi Wednesday night from Texas a little after 8 pm, thanks to an hour delay to drive 9 miles between Longview and Marshall.  Pretty sure it was faster and easier to make the trip home going across Mississippi and Arkansas even at 55 mph, and a whole lot prettier.  I was up Thursday morning to go give clinical exams for the next two days.

It was a busy 4 days after I got home to Texas last Friday night.  Sis had cleaning up dad's workshop/barn on her list, along with sprucing up the decks.  Dad wanted to go out to the barn with us Saturday morning to "supervise."  I think he thought we might throw away something, although we assured him we were just straightening and sweeping and getting out real trash, like empty feed bags, etc.  He wanted to go anyway, and we wheeled him down in the wheelchair to watch and keep us company.  Later, he came out on the deck to explain how to put the tomato cages on, since Sis had not gotten it done before the tomato plants got pretty big.  We all enjoyed the time and effort.  It was a wonderful day and he laughed and enjoyed being with us, and so did we, and all agreed it was worth it even though it really tired him out and sapped his limited strength.  I went back Tuesday afternoon and finished straightening the workbench, putting away tools, cleaning up some spilled screws, and sweeping out the rest of the shop.  Dad was always meticulous about putting away his tools, in their proper place, and keeping his work area clean and organized, and it was satisfying, if somewhat bittersweet, to be working in his space, organizing again. 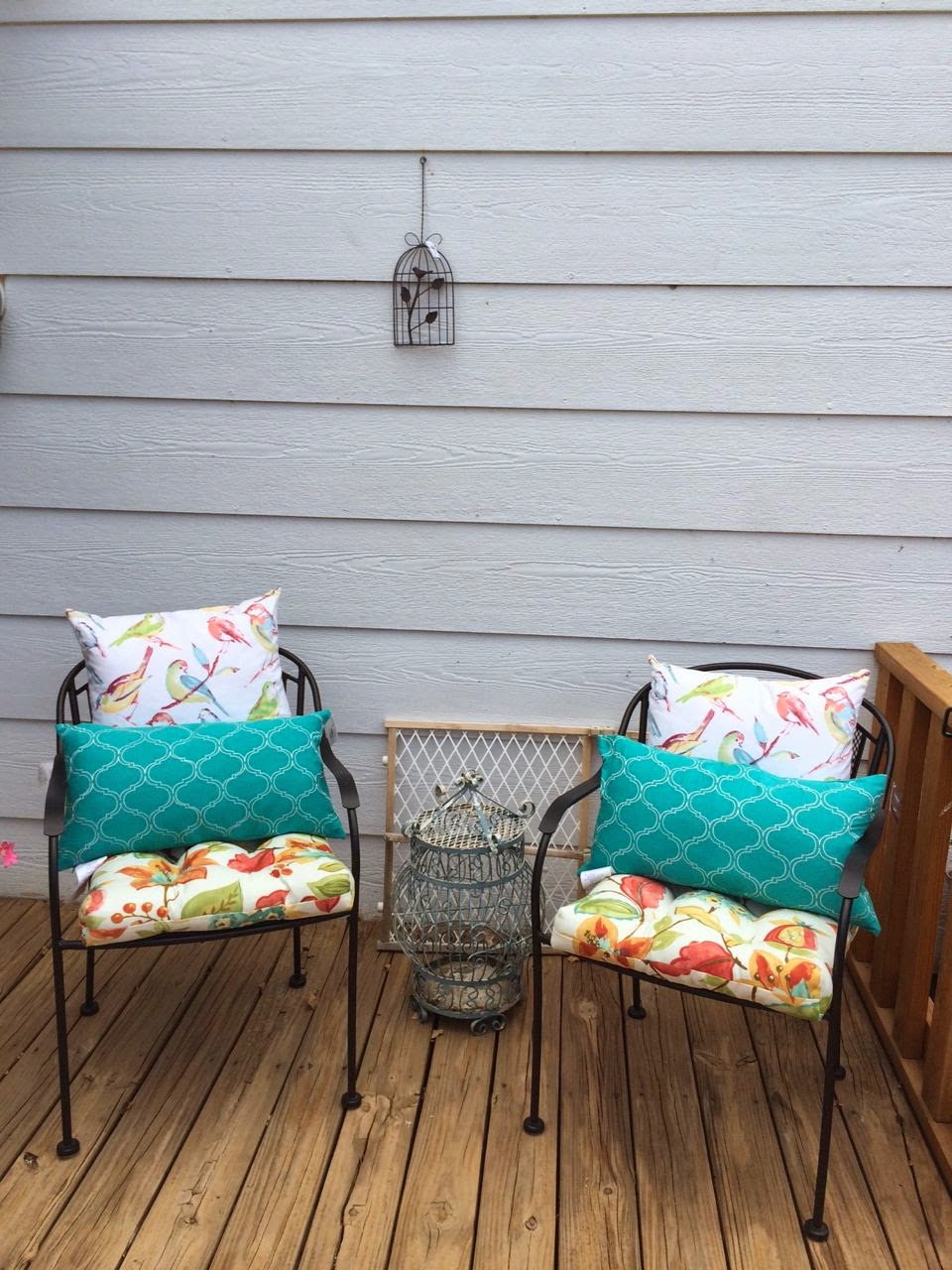 Monday, Sis and I went to Wichita Falls for her doctor appointment, and shopping.  I have not been shopping in such a long time, and we had such fun and an amazing time.  We were looking for new pillows to use on the decks.  We did not finish with the decks or the breezeway that joins them, but I will be going back one more time in August, and we will finish up then, and get the other half of the shop.  I did my usual cleaning out of Rio's water trough as well, and spoiled him with treats and petting. 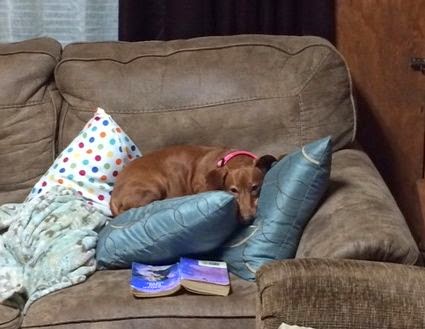 Tuesday evening, Tinka was feeling a little down in the dumps, and curled up on the pillows in the den.  I packed and loaded that night, and was up at 5:30 Wednesday to feed Rio and Jenny one last time before I left.  They were waiting at the gate when I went out.  Dad and Mom had wanted me to wake them and tell them bye before I left, and then I was on the road by 7.  I was making great time, and thought I would be home by 6 or 6:30, when I hit the snafu out of Longview. 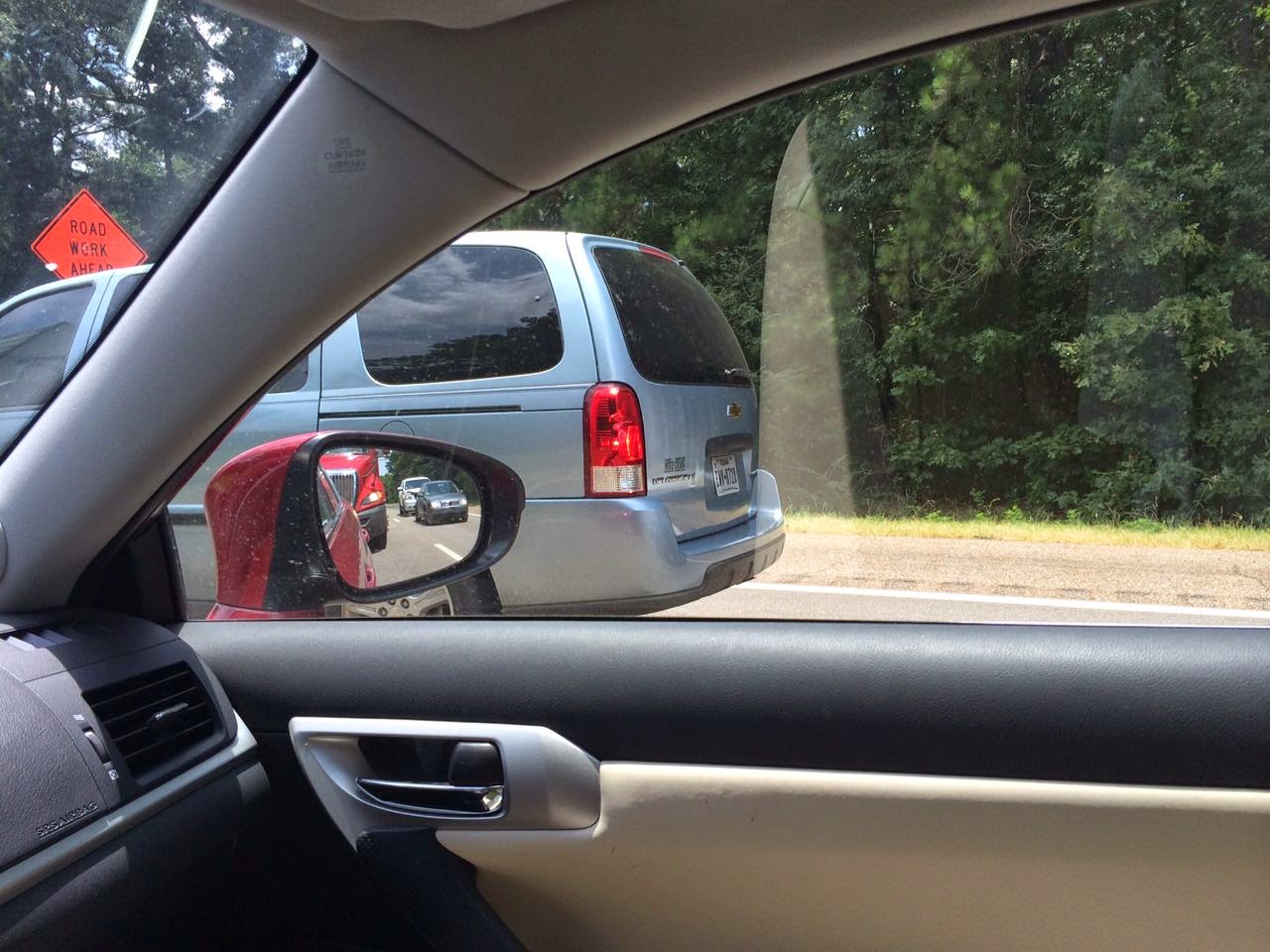 I know construction traffic is annoying--I don't like it either.  But here's the way that I see it: when you get that warning sign that says right lane closed ahead, if everyone started merging over then, the traffic could keep moving.  True, it would be slower than 75, but it would move...steadily.  I moved over to the left lane, as did a whole lot of other folks who know there are times that playing by the rules is a good idea.  There are always those who think they are entitled to cut in line, though, and apparently, several hundred of them were on I-20 outside of Longview, Texas on Wednesday morning. 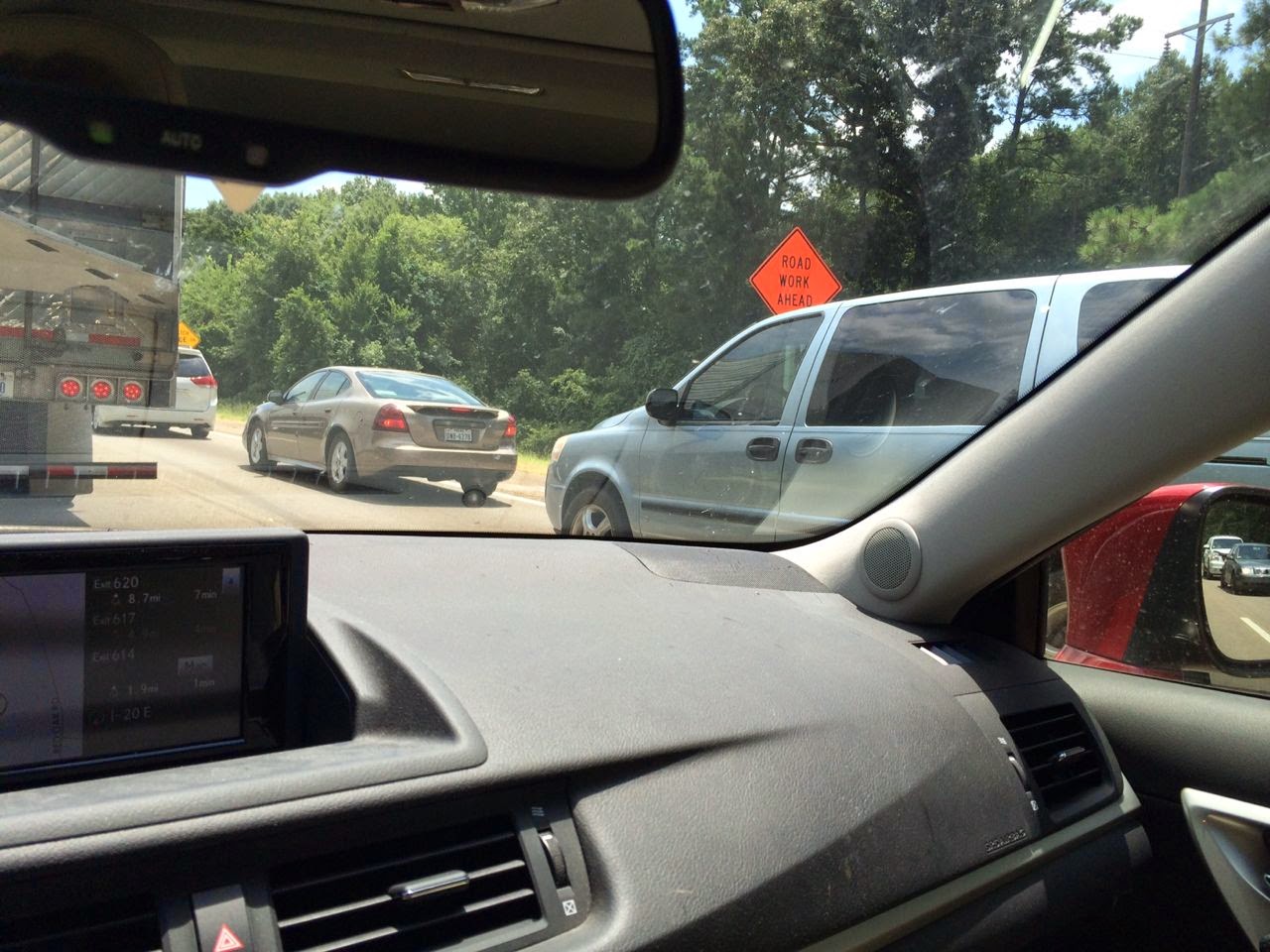 All I could see behind me or in front of me was a stretch of cars and trucks--mostly cars.  Perhaps because truck drivers communicate with each other, they tend to stay in the lane that is going to move.  Lots and lots of cars were going up the soon to close lane, until of course, it finally hit saturation point, they were all cutting over in front of the traffic, which would cause the vehicle to have to make a dead stop, and then both lanes were stopped.  So, the results of some folks not wanting to queue up meant that most all of us were at a dead standstill...for minutes at a time...

I recall when I learned about queuing for the first time.  I was in New York, and being from Texas where folks just walk up randomly and haphazardly and order, I had checked out the foods in the deli case and once I decided, looked up to order.  Someone behind me or beside me said, "Get in the queue, it's not your turn" or something to that effect.  Oops, "sorry, I did not mean to cut in line."  I just did not know that there was a line, being a rube from Texas and all.  Queuing is also common in England, Europe, and South Africa, and I do see it more and more in the US.  For sure, I am much more observant now about whether or not it is my turn.  Mississippi seems to have an issue with queuing at the 4-way stops, too, as in "I stopped, now I get to go" regardless of how many of the other 3 vehicles were there first and had already stopped.

In my next life, I shall be the Queue police, and have a little hover board.  When folks on the highway don't queue, I will pull them over and cite them, plus have them wait until all the cars they passed to cut in line have gone, plus, an extra 10 cars for punishment.  I will need a really good camera/computer database to keep up with that, won't I?
Posted by Suzassippi at 5:40 PM

Having been in this drama before I've wished that there was a big hook in the sky that would just rip the non-queuers (how do you spell that?) out of the way. I think your hover board is excellent, you are hired. And, I hit that same stretch in March, construction moves slowly.

I think non-queuers is perfect. I am sure since we don't queue in the US, Google/Blogger is not sure about how to spell it. :)

Perhaps I shall not wait for my next life, and just go ahead and start work as the Queue Police now. How much is the salary, and what are my hours?

I opted to come home via I-20 due to the nasty miles of construction on 30 between Little Rock and Texarkana. Do ya hear me laughing yet?

Honestly. This is why my husband who drives a big truck for a living pulling a flat bed trailer knows every two lane that will handle a rig his size and weight. Two lanes in Texas are a lot of times nicer than 4 lanes in Texas and the speed limit is only slightly lower.

And grrrr, hey buddy - yea you - that BIG SIGN that said get over a mile back was meant for you too! They are 4 laneing (sp?) 45 between Brooksville and Columbus and have been since I started working in Columbus almost two years ago. I've many a morning wanted a big hook to drop out of the sky and take some people with it too.

LOL Ain't it the truth. Can you just imagine if that actually happened? This big hook comes out of nowhere and picks up the vehcile and is suspending it in mid air when up flies me, Queue Cop, on my hoverboard. "Uhm, excuse me, do you know why I ripped you out of the traffic lane?"