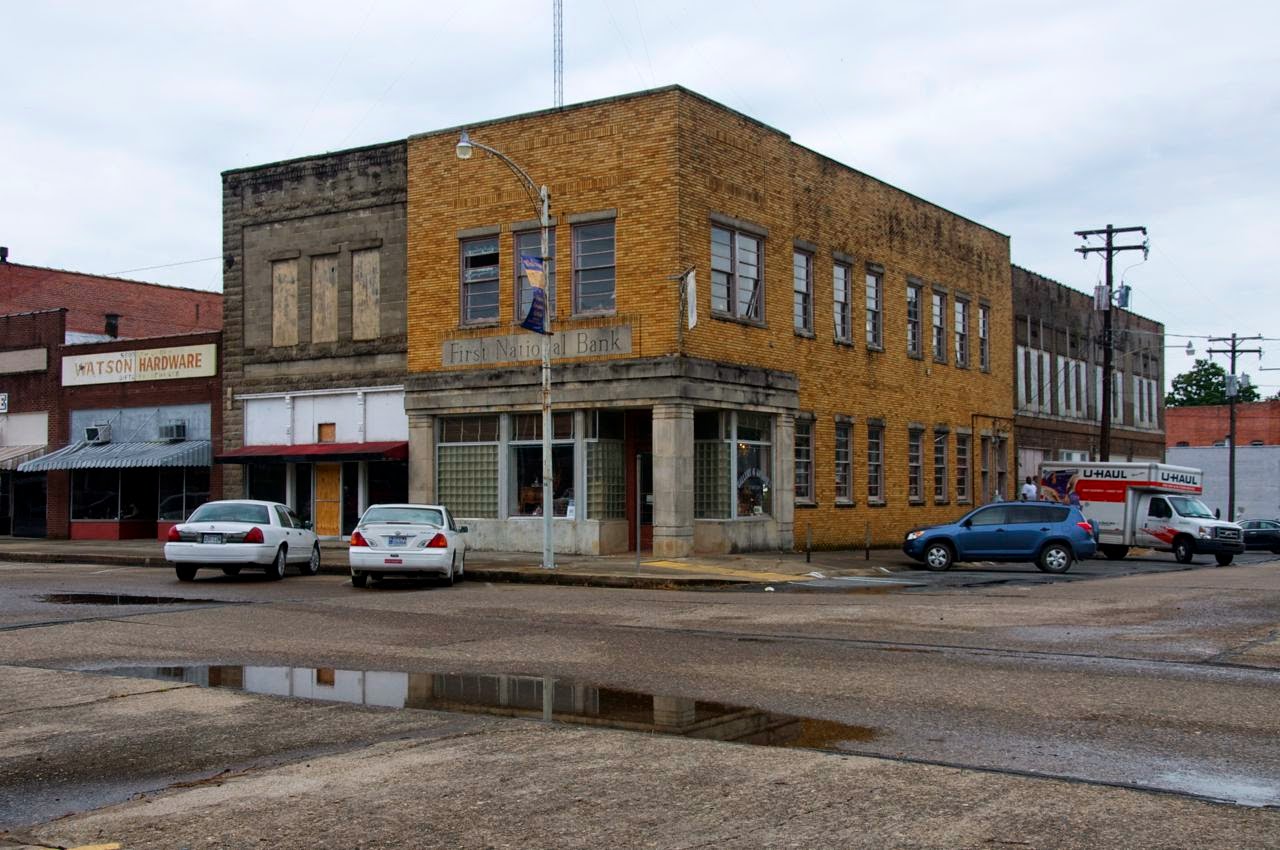 Friday morning saw me on the road by 8 AM, and plans to drive across Arkansas again on my Texas trip.  It was a beautiful--if overcast--morning and I just drank in the sight of the green fields as I drove across to the Helena bridge.  I stopped at the Arkansas rest stop just across the river, and the woman at the desk was so helpful with information and we chatted for a bit as I explained why I was driving through Arkansas on state highways as opposed to the interstate.  She was a bit older than I am, so knew all about the New Deal and Arkansas' depression-era architecture.  I was actually headed to De Witt for a New Deal building, and had discovered their unique public square.  I have an interest in the variety of designs of public squares in small towns, and De Witt does lay claim to something that I had not seen before.

Parts of the square are still in use, and other buildings are shuttered and waiting for a revival.  Even though driving rural roads takes longer, I have become excited about the possibility of seeing the Americana opportunities in these small rural communities, and it is like a mini-vacation of sorts--the road trips to/from Texas are the closest thing to a vacation I may get for a while.  I kept thinking of during the Depression, and the beginning efforts to encourage motor tourism, and the role that the New Deal played in the development of that mode of tourism. 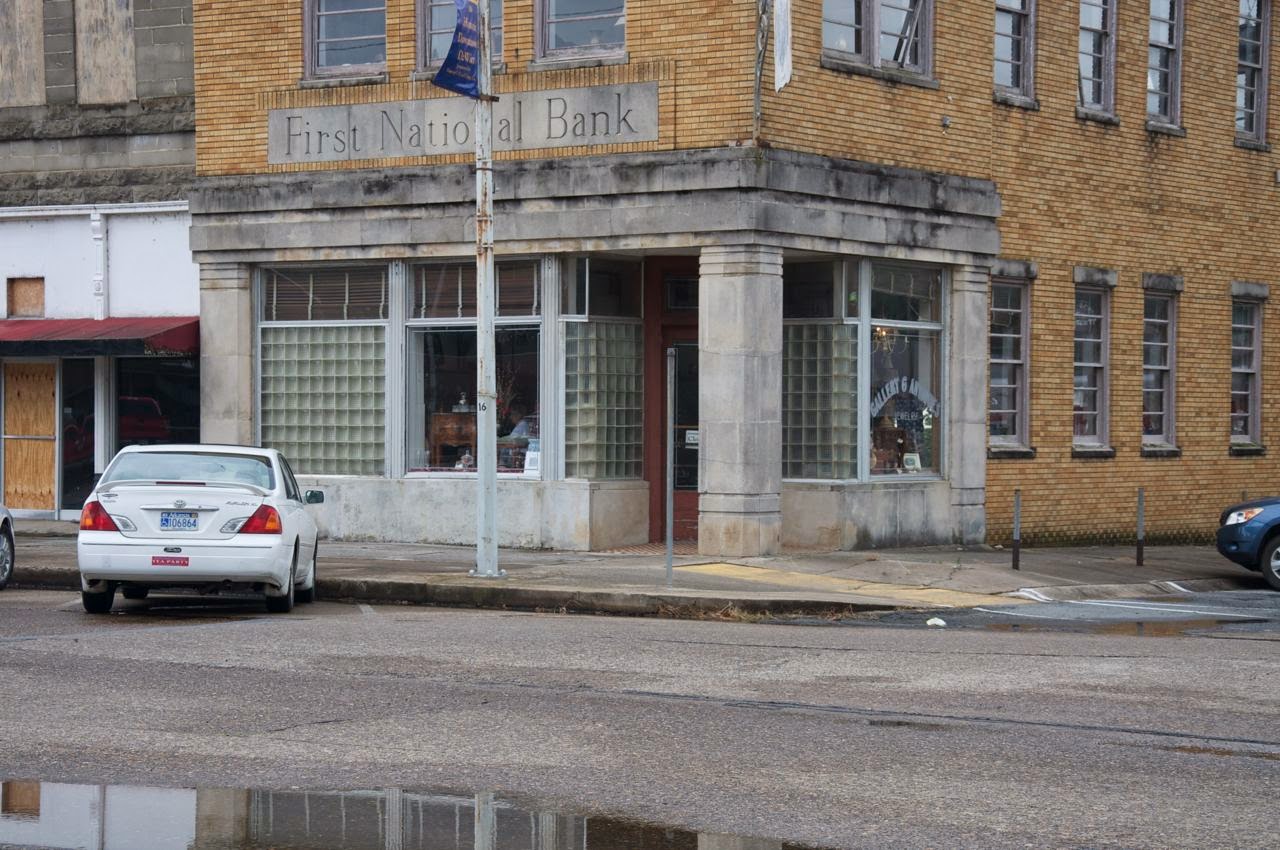 The First National Bank of De Witt was designed in 1910 and opened in 1912.  It was remodeled in 1923 and in 1940.  FNB "survived the Depression to become the oldest bank in Arkansas County" (De Witt Commercial Historic District, Arkansas Historic Preservation Program).  They took over neighboring banks that failed during the 1920s and 1930s.


De Witt's banks had more money in them than in the banks of any other city of its size in the state.  (Encyclopedia of Arkansas History and Culture, encylopediaofarkansas.net) 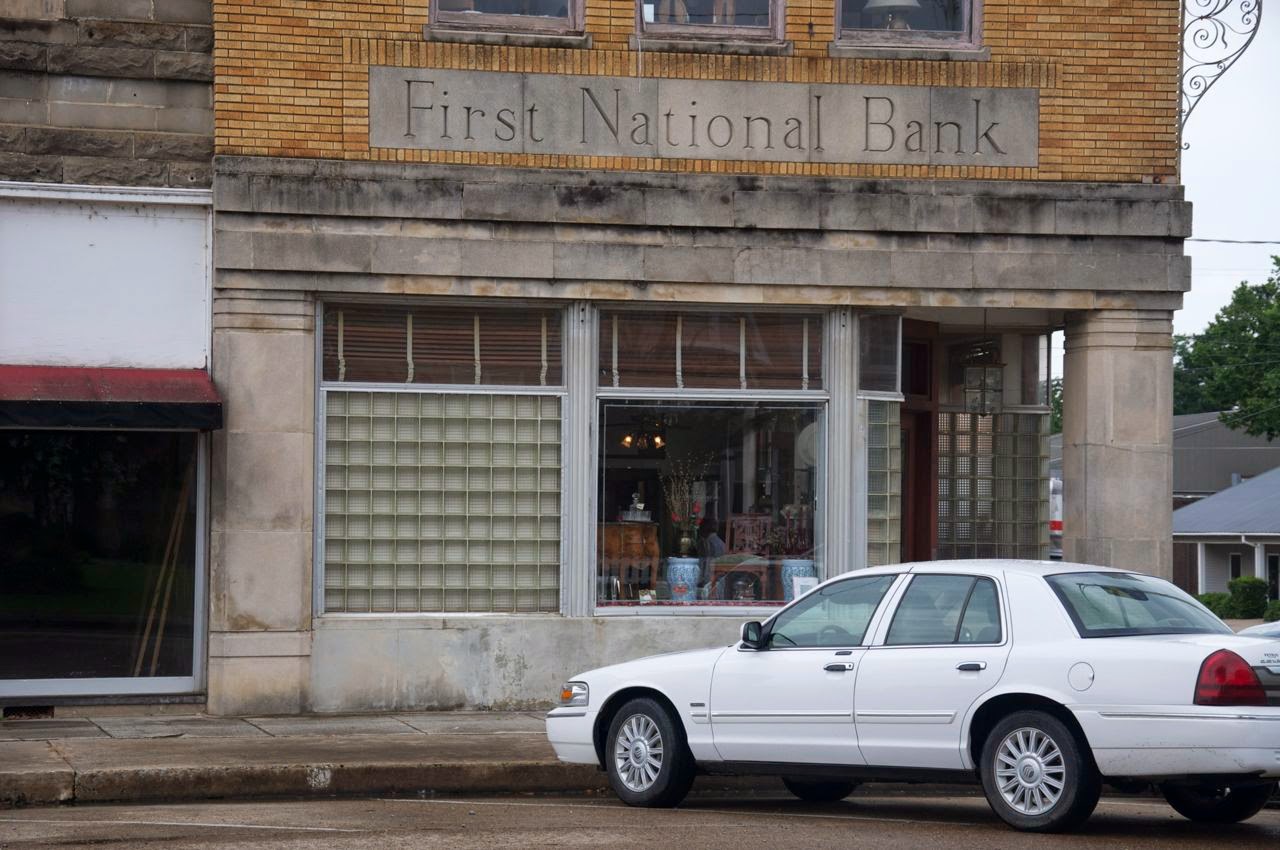 The bank was designed with a canted door--an angled or cut-off corner or chamfer--as were many of the banks and drug stores during that time period.  Glass block was developed in the early 1900s (Klayman, J. Architects are rediscovering glass block. Masonry.  Retrieved from masonrymagazine.com), so the glass blocks could have been added during one of the later remodels.  One source said glass blocks were first developed in the 1800s, and one said not until 1931.  That is a pretty wide range, but I don't find definitive dates on it.

The telephone operated upstairs, and during the 1930s, the post office was located in the rear of the building.  It currently houses and antique/gift shop.
Posted by Suzassippi at 10:11 AM