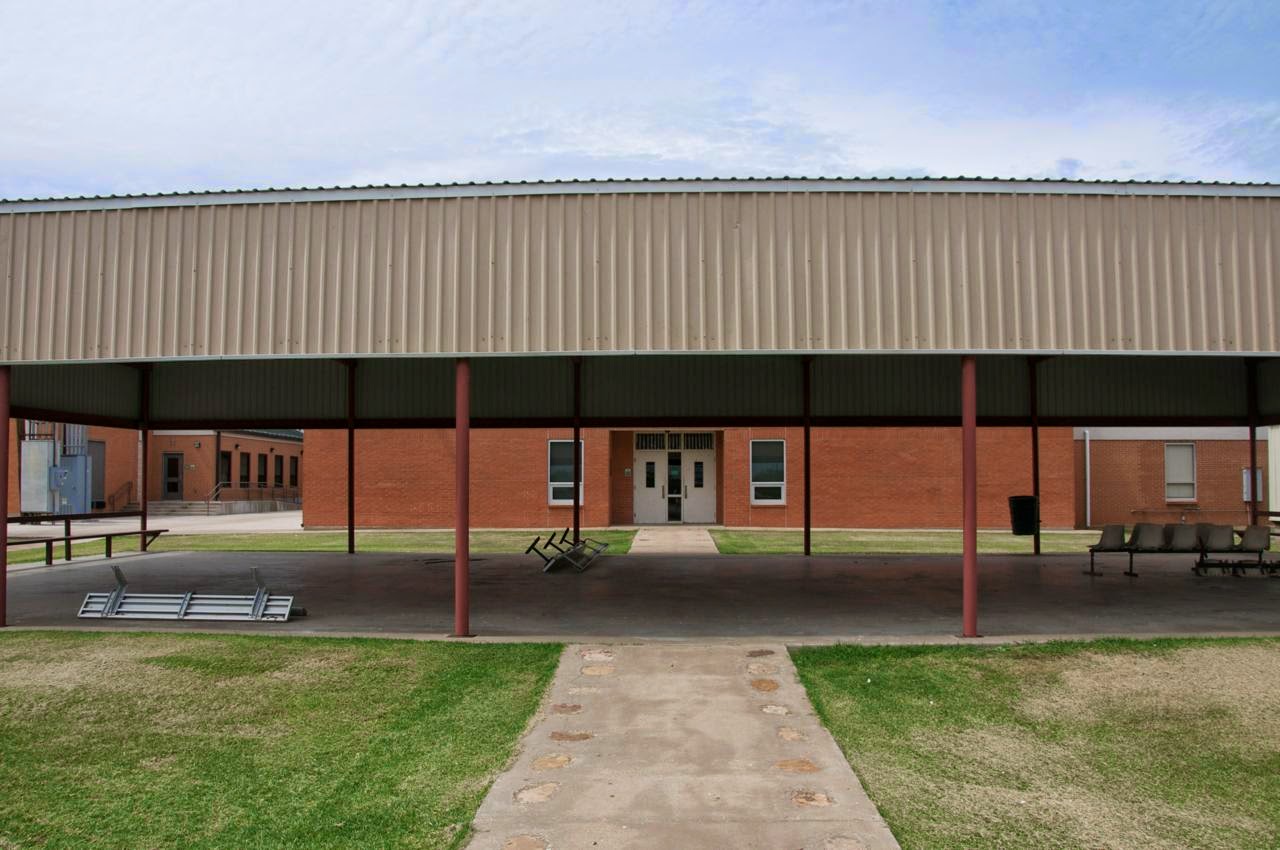 Hoover was still president in 1931, and he had been reluctant to address the effects of the Great Depression, which is precisely why he was not re-elected.  Now, President Hoover had promoted some some things, most notably the Public Buildings Act of 1926, which provided for construction of Federal buildings such as courthouses and post offices, the Wagner Employment Stabilization Act of 1931, which saws its Public Works Section especially active, the Emergency Relief and Construction Act in 1932, which called for expenditures for public works at all levels of government, and the Reconstruction Finance Corporation in 1932, which lent money for public dams, toll bridges, and slum clearance, and for debt relief to the railroads.  The Emergency Relief and Construction Act permitted loans to states or cities for relief and work relief, for self-liquidating construction projects such as water works facilities.  Self-liquidating assets are those that will bring a "sufficient return to pay back the loan and its interest and leave a profit." 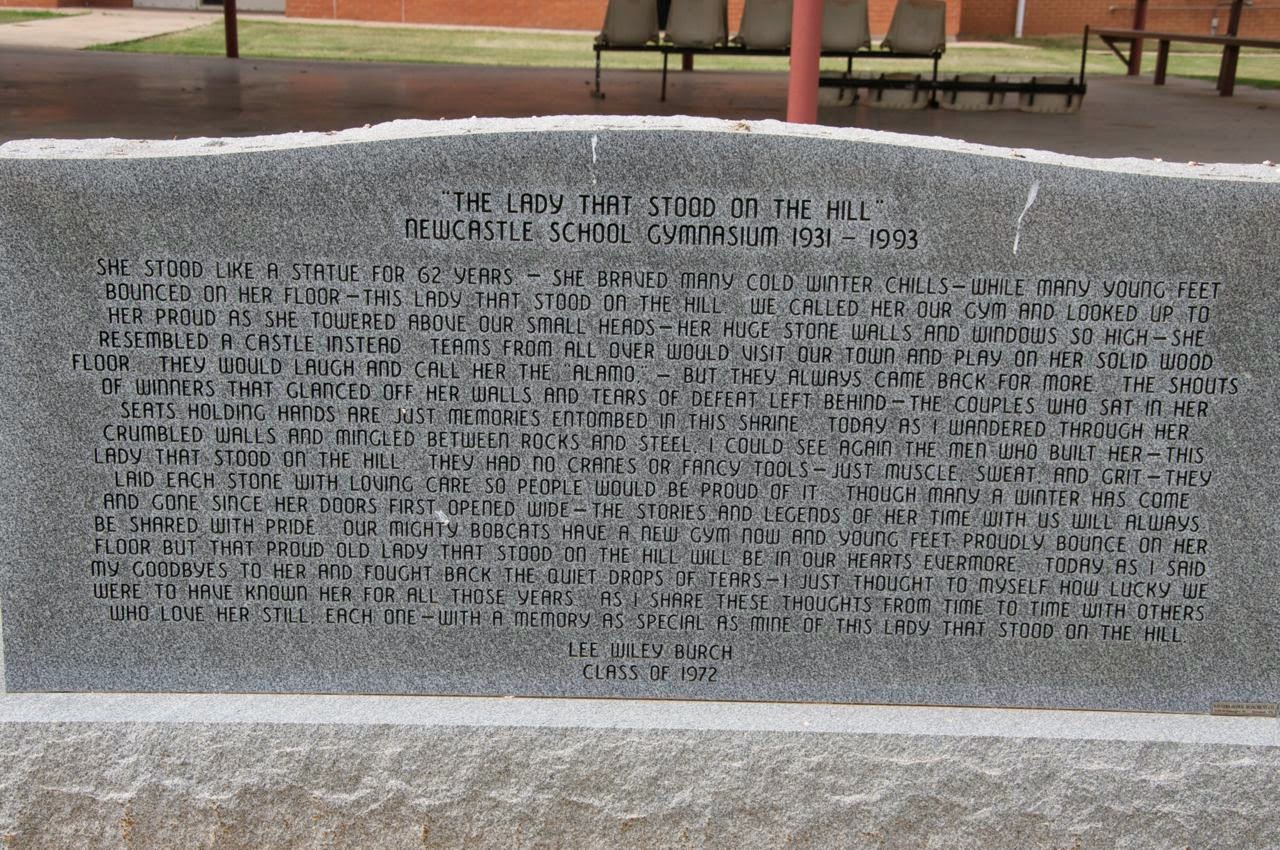 The gymnasium may have been built with Federal support, but it was most certainly not the WPA workers if it was constructed in 1931.  Texas did not apply for funds under the ECRA until late in 1932, and by then, "the well proved more difficult to tap" (New York Times, 31 July 1932, p. 8, as cited in Sautter).


...the 1931 act accomplished precious little.  Its loose wording left the initiative to those charged with its implementation, and the administration took care to see its views carried out....Nobody could claim that the passage of the ERCA meant the adoption of a vigorous federal public works program.

Total expenditures for unemployment relief on the local, state, and federal levels are thought to have amounted to about $600 million in 1932.  whatever percentage of this sum went to public works and work relief, the employment effect cannot have been very pronounced.  (Sautter, 1991)

Nor could the public works section of the ECRA have funded the efforts at building the gym, since that would not have come in 1931. 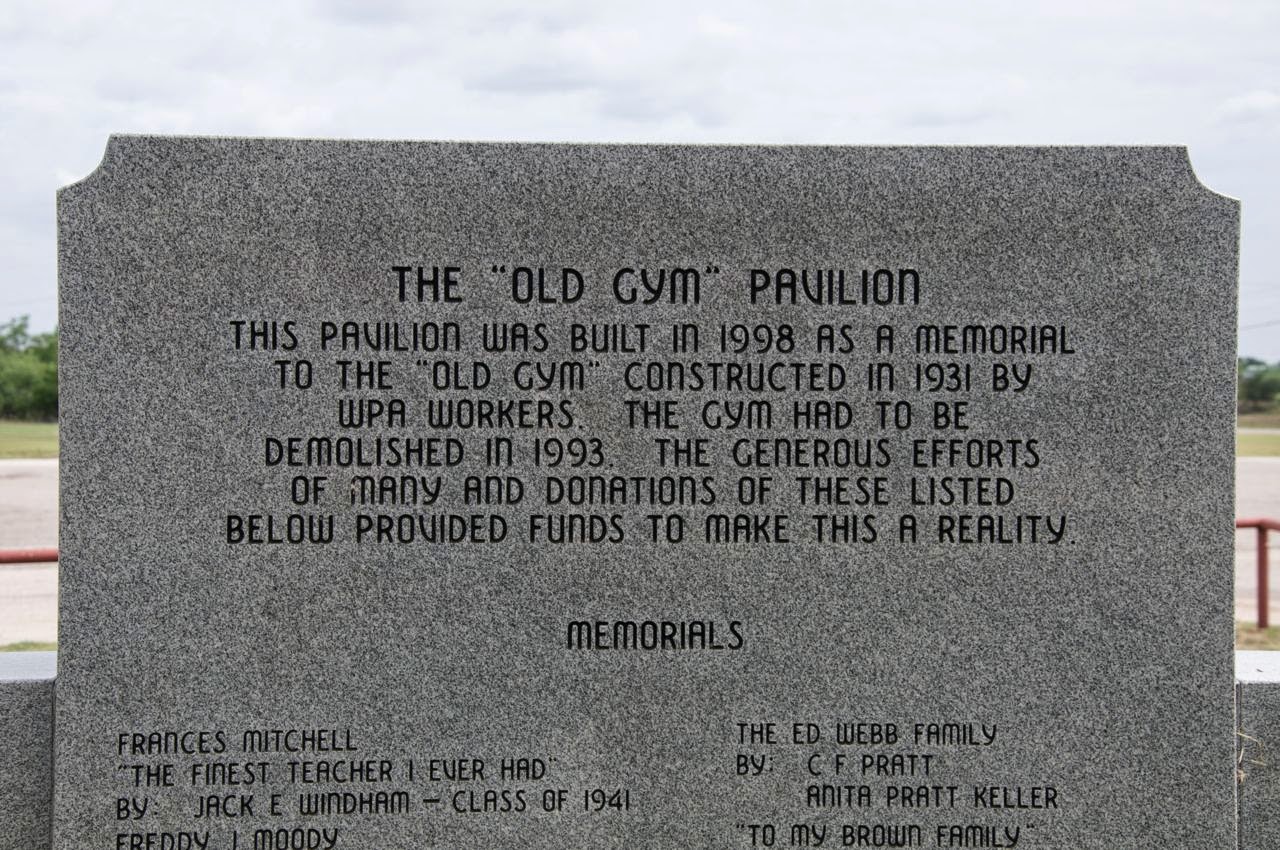 So, who did finance the gym, and in what year?  This is a mystery I have spent over a year trying to unravel.  The information I originally had was that an article in the Newcastle Register, the local paper, indicated the gym was built by the CCC sometime in the 1930s.  This was contradictory to the information I had from my father, who attended school in Newcastle during the construction of the gym, who said it was WPA workers.  Somehow in my correspondence with the Young county historian who had advised about the Newcastle Register article and the CCC origins of the gym, I had overlooked a subsequent note from him that he had located minutes from the 1936 school board meeting.  I ran across it yesterday, and in much surprise since I don't recall getting it from him in the first place.  But that was during a difficult time when I was traveling back and forth to Texas on a monthly basis to help out with caregiving, so I cut myself some slack on losing it.

28 January 1936. Consideration was given to building a gym as a WPA project at Newcastle.  On 2 February 1936, the school board came up with a matching $3,800 and the building was underway.  WPA employee A. C. Duckett was assigned project superintendent. 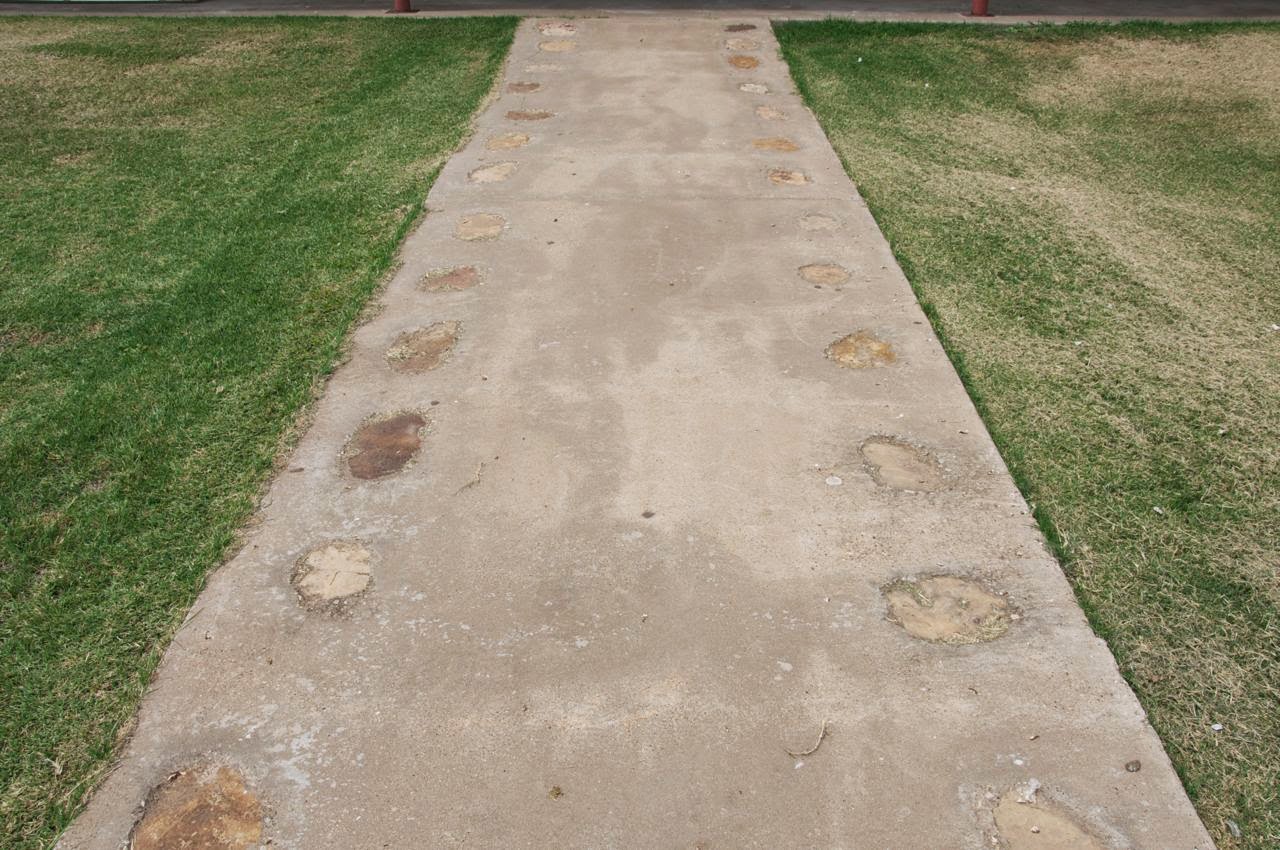 By searching with the specific year, I found an article in the January 1937 Olney Enterprise that referenced the new gym.

Students at Newcastle have been enjoying their newly-completed gymnasium, which was erected through the aid of the WPA. (p. 8, 15 January 1937, retrieved from newspapers.com)

Searching in the 1936 archives led me to 17 July 1936, and the article "WPA Renewed on County Projects." Projects were stopped July 1 when the old order of WPA ended (probably due to fiscal year changes) and resumed again later in the month.

The Newcastle gymnasium will be completed, and restoration of Fort Belknap will be continued.  Both these projects were begun last fall as education improvements to Young county.  The gym will be of immense practical value, and the restored Fort will be used in many reunions and historical occasions held in the county.--Graham Leader. (The Olney Enterprise, p. 10, retrieved from newspapers.com)

So, how did folks who put up the memorial marker get the idea it was built in 1931?  Rand suggested that they might have been using documents that were faded, and the 7 looked like a 1.  Many people don't know much about the history of the New Deal administration and the Federal projects employed to address the Great Depression's devastating effects.  Everything is "WPA" to most of them, even though there were a number of differing projects used for different purposes.  History, particularly the specific year, is of little concern to some folks as well.  If you had a parent or grandparent, as I did, who had lived through the Depression years, you grew up hearing about it, and the impact on their lives. 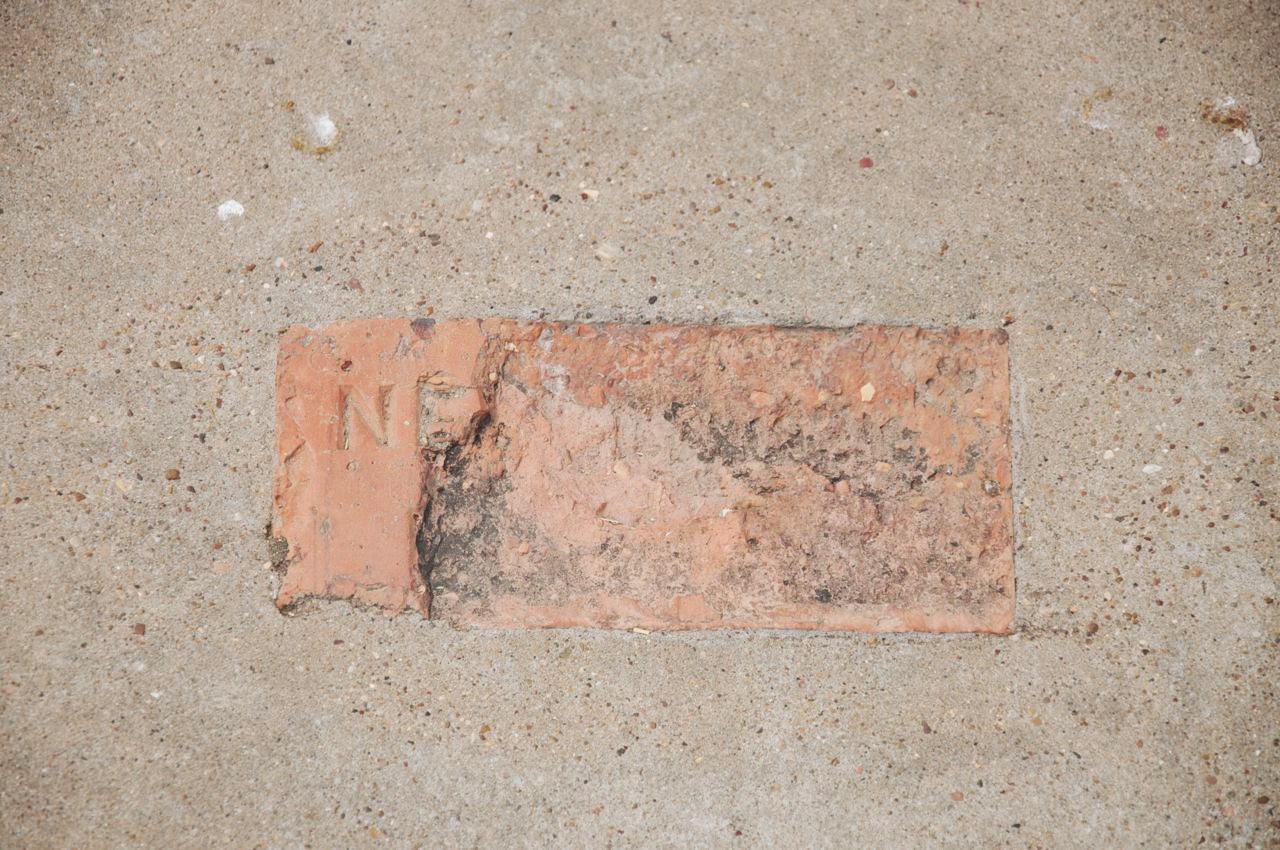 I remember one Halloween carnival held in the gym when I was 5 or 6.  Our house was just across the road from the school, so I saw that old rock gym standing behind the school building every day.  Many communities have been able to save the buildings that were constructed by the New Deal, and they remain in use today.  Others, like Newcastle, for whatever reasons, demolished them or they sit abandoned and in ruins.
Sources:
Arkansas Historic Preservation Program.
Hitlzik, M. (2010). Colossus: Hoover Dam and the Making of the American Century.  New York: Free Press.
Hughes, L. P. (1999). Hoover's Tragic Presidency.  Austin Community College.
Ludwig von Mises Institute: Advancing Austrian Economics, Liberty, and Peace.
Rothbard, M. N. (2000). America's Great Depression (5th ed.) Auburn, AL: Mises Institute.
Sautter, U. (1991). Three Cheers for the Unemployed: Government and Unemployment Before the New Deal.  Cambridge, UK: Cambridge University Press.
Taylor, N. (2008). The Great Depression: A Short History of the Great Depression. New York Times.

Posted by Suzassippi at 8:04 AM