While I was down in Choctaw (right next door to Williamsville and Philadelphia), I made a stop at Williams Brothers General Store on the advice of Lana over at Hickory Ridge Studio.  She said you could get anything from horse tack to groceries, and I discovered, a whole lotta stuff falls into the category between tack and groceries!  Williams Brothers was founded in 1907 by Amzie and Brown Williams, and still run by family members.  Current co-owner Sid Williams said

My granddaddy was doing a big business here before Sam Walton was even born. (Becky Gillette, August 19, 2012, "Williams Brothers General Store is something to count on," Mississippi Business Journal) 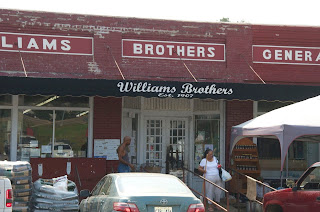 They also sell mule collars, hardware, fencing, tack, saddles, horse gear, dog, chicken and horse feed, groceries, boiled peanuts, and a range of clothing, from babies to elders.  You have to see it to believe it.  Walking through the front doors was stepping back in time.  A butcher was set up just inside the door to slice bacon, bologna, and cheese to order.  Vegetable bins were visible to the right, and rows of groceries in the aisles straight ahead.  I could have spent a lot of time, and a little money, but I still had a long day ahead of me with research stops to make. 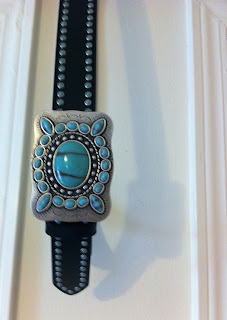 I settled for this belt, and only later thought I should have gotten the boots to go with it.  I guess I will have to head back down there one of these days.  Technically, the store is in Williamsville, and the Williams brothers were the ancestors of Olivia Williams Manning, wife of Archie and mother of Payton, Eli, and Cooper Manning.  We love to watch Payton and Eli play.  And speaking of Eli and Ole Miss football, check out the sea of red from last night's game in Austin against University of Texas. 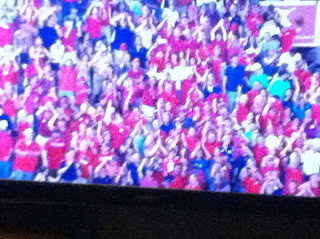 Mississippi put the whup to Texas, and while I don't get real excited about who wins a football game, this one had me texting back to Texas to brag to my sister, especially on that 73 yard touchdown on a kick return.
Posted by Suzassippi at 11:31 AM

So glad you enjoyed it! I love that place and always wish I had way more money to spend than I usually allow myself.