Randy and I married 32 years ago today, in Las Vegas.  Somewhere along the way, we began taking an anniversary trip every year.  The move to Mississippi disrupted that tradition.  For 10 years, we have been talking about driving up the Natchez Trace to Nashville.  I decided this week that this was the time to do it, and on our anniversary weekend. 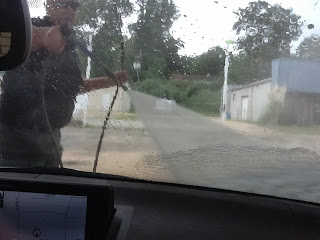 As we were getting into the car this morning, I glanced down and noticed that one of the cats had mistaken that little space between the windshield and the hood for a litter box.  I went back into the house to get paper towels to clean it up...it was over the air vent and when Rand turned on the AC...you know the rest of the story.

We rolled down windows and went to the car wash, so that is how the day started.  Still, you have to laugh--we have never taken a trip yet that something hasn't happened, so guess it won't start now after 32 years of trips. 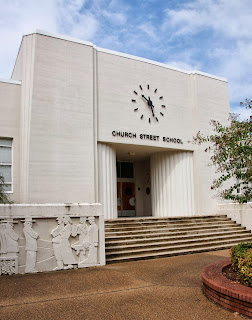 The closest access to the Trace from our house was the one in Tupelo.  We found it, but Rand needed a Walgreen's to get eye drops as his allergies are in full gear now that the Goldenrod is in full bloom.  While I was waiting on him, I pulled up the location of the Church Street School, one of the New Deal Administrations projects in Tupelo, and we were only a few blocks from it.  Now one thing I love about Rand is he never complains when I want to stop to take pictures, or even go out of the way a little bit.  However, I am directionally challenged.  Because I learned to navigate using a paper map, where north was always up, I forget that the google maps don't recognize that principle.  I am forever realizing after I am going the wrong way that Oh, yeah, I was not facing north when I started...

After a few blocks, I checked the map again and sure enough, I had told him to turn the wrong direction.  Turn around, go back and start over.  And of course, a train comes, and after that, the lights are set to stay green on our side about 3 seconds (literally, as in 1 car could go before it turned red again), so it took quite a bit of time to get to the school.  I will post more later about the school itself, but after getting the photographs, and explaining to the woman who came out of her house when we stopped and watched me the entire time what I was doing and why (apparently, I seem to arouse a great deal of suspicion anymore by taking photographs--never have I been asked what I was doing and why before I started this project).  After suitably impressing her, we headed back toward the Trace entrance.

Only, we missed it.  I didn't see how Randy could have, but I was messing with the camera, so I was not looking.  I mean, you have to drive right under the bridge that is the Trace, and there is a big brown sign that says "Natchez Trace Parkway."  By then, it had been 2 hours since we left home, and Tupelo is only 45 minutes from our house.  I said I could see it now, "What did you do for your anniversary?  Oh, drove around Tupelo for a few hours." 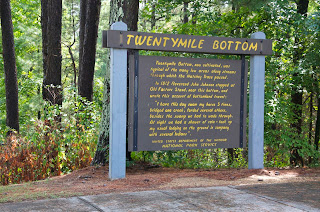 It's a leisurely 50 mph speed limit on the Trace, we were in my CT hybrid, and it was a beautiful clear blue sky and temperatures in the lower 70s.  Who could ask for more?  First stop, Twentymile Bottom. 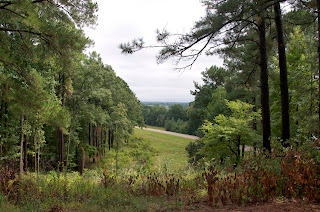 The view shed from Twentymile Bottom. 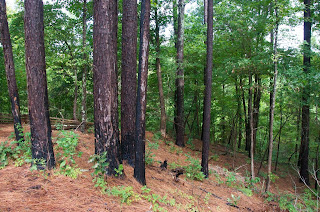 Evidence of recent fire.
Posted by Suzassippi at 6:43 PM

Happy anniversary! Hope you are having lots of fun! xoxo

We had a great day on the Trace, a lovely evening, and now relaxing with coffee, I may have to do this again---before 10 years!