How's your back side? 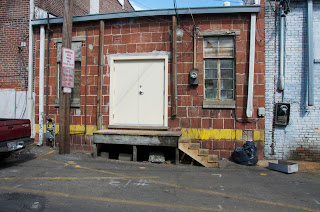 Cutting through the alley that runs behind the Oxford Square will give you a definitely different set of images than walking around the picturesque historic square. 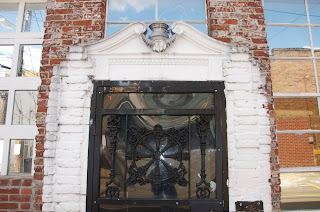 This is the side entrance from the alley, into the Library--the one that is a bar, not the one with books.  It strikes me as an unusual door for an alley, but I don't know the original use of the building either. 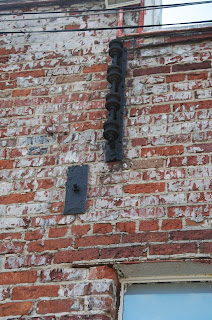 The vertical bar beneath the window would have held electrical wires.  I have seen these in other older buildings around the area. 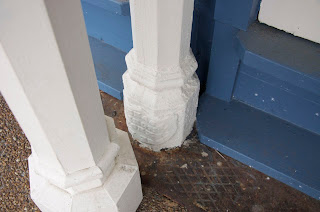 These columns appear in front of City Grocery.  The rear column is clearly an original, and is a type of plaster over it.  I tried to read the sign at the base, but it has too many coats of paint to be clear enough.  there are two columns that appear to be reproductions (of wood) in front of the other column.  You can also note the iron step, similar to the others from the Chickasaw Iron Works in Memphis that have been noted at various locations around the area.
Posted by Suzassippi at 8:08 AM