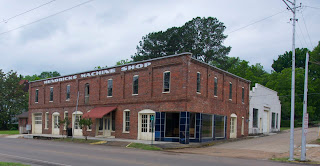 There is quite a history to this building, built in 1860 on Water Valley's Main Street.  The 15,000 square foot building was mentioned in the 1912 volume 12 edition of the Publication of Mississippi Historical Society, along with the fact that in 1860 when it was built, there were 9,531 slaves in Yalobusha County.

It is also listed in the 1918 publication Penton's Foundry List: Directory of the Gray and Malleable Iron, Steel, Brass and Aluminum Foundries in the United States and Canada. 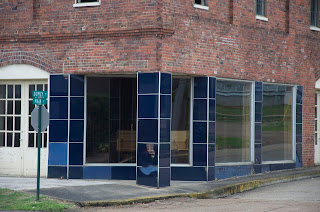 Mickey Howley, manager of the Water Valley Main Street Association, referred to the blue glass on the building as a "best example" of Carrera Glass.  Carrera glass was one of three trade names for pigmented structural glass, "a colored opaque glass popular on early 20th century buildings" (Preservation, 2002).  Vitrolite and Sani Onyx were the other two brand names.  Many 19th century buildings on Main Streets across the US added the opaque glass to "hide their 19th century dowdy masonry" (Preservation).   The first claimed manufacture of structural glass panels was in 1900, and it was a popular material from the period of 1907-1937.  These glass panels could have been added at any point.  Replacement panels are difficult to find as they have to be salvaged from buildings.

The 1931 Watermelon Carnival Parade featured two floats by the Hendricks Machine Shop.  In 2006, the building (apparently only briefly) housed the Grand Central Station Antiques and Tearoom.  In 2010, it was purchased by Bill McGregor and "recently renovated" in 2011, winning Water Valley Main Street Association's "Saving Heritage Award."  A studio for stained glass was housed in the building in April 2011.  In December 2011, it was listed for sale, but "set off-market" in February 2012.
Posted by Suzassippi at 12:01 PM

Had forgotten about that beautiful blue carrera! Wow!