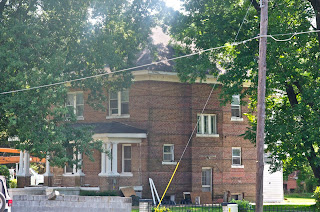 I was excited to see work being done on the Eugene P. and Mary C. Booze home in Mound Bayou.  Mary Booze was the daughter of Isaiah T. Montgomery, one of Mound Bayou's founders.  She was a National Republican Committeewoman for a number of years. 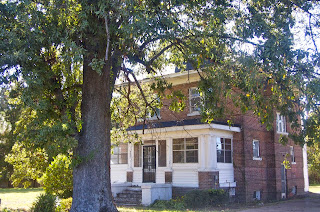 Last fall when I first learned about the Booze home, it had this enclosed front porch.  I thought it was unlikely to be original to the house. 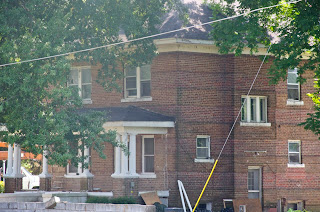 Due to the work being done, and a large truck parked in front of the house, we were unable to get close enough for a good view, however, it is obvious the porch enclosure has been removed and that work is occurring on the inside of the house.  I also located an early photograph of the home and it confirms there was no enclosure on the front porch.

Mr. Booze and his sister-in-law, Mr. Montgomery's other daughter, Estelle, fought over ownership of the house (Time, November 20, 1939) and Estelle was shot and killed by State Police.  She allegedly attacked Mr. Booze and the state police officers with a butcher knife after the courts awarded ownership of the house to Booze.  Estelle had been attempting to share in her father's fortune, but apparently had been disinherited (no information that I can find regarding that) and was almost poverty-stricken at the time.  I can imagine that this was something of the final straw for her.  By report, citizens of Mound Bayou were angry that Mr. Booze had called in state troopers (who were white) to kill Estelle, and they in turn shot and killed Booze.  I'm sure there is more to the story out there, and I will see if I can find it.

Updated news, June 1: Thank you to Diane, who provided that "more to the story" and sent the link below.  She located a letter from Estelle Montgomery to W. E. B. Dubois in which Ms. Montgomery explains the fear for her life and efforts of Mr. Booze to dispossess her.  She even suspicions that Isaiah T. Montgomery might have been poisoned by Mary, at the instructions of Booze.  Read the letter in full at this link to the University of Massachusetts Library Special Collections.
Posted by Suzassippi at 10:49 AM

Wow, that is quite a story! Would love to know more!

There is an amazing letter in the UMass arhives dated 1927 from Estelle Montgomery to W.E. DuBois regarding this on-going feud, which starts, "...at any time there may be murder at my home, for talk of dispossing (sic) me is rife."
Here is the link http://oubliette.library.umass.edu/view/full/mums312-b039-i493

Thanks, Diane, for this amazing find. It definitely adds to the story.